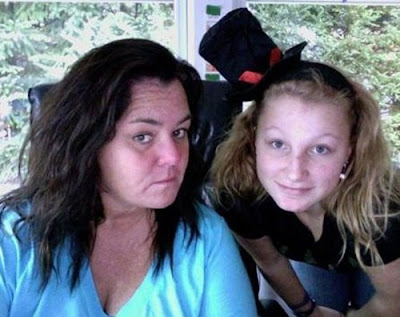 Just a few days after Rosie O’Donnell’s teenage daughter Chelsea was discovered by police hiding in the house of a 25-year-old dude she met on Tinder, she has left home again. TMZ says that Chelsea turned 18 on Monday and she spent her birthday driving to Wisconsin to live with her born mother Deanna Micoley for a while. Rosie didn’t exactly give her blessing and an already messy situation just got another layer of messy added to it.What do you think?

Chelsea became a part of Rosie’s family in 1997 and she didn’t have any contact with Deanna until last year. Chelsea tracked her down and the two have been talking ever since. TMZ says that on Monday, Deanna drove from Wisconsin to New York to pick up Chelsea. Rosie didn’t want Chelsea to go, but she went anyway. Rosie responded to that by cutting her off financially. Rosie is also keeping Chelsea’s birth certificate and social security card.What do you think?

A few months ago, Deanna went to The National Enquirer and accused Rosie of “stealing” Chelsea in 1997. Deanna claims she was high on the bad shit at the time she gave birth to Chelsea and her then husband forced her to give the baby up for adoption. Deanna thinks that Rosie must’ve known that she was fucked up on drugs and was in no condition to make a giant decision like putting her baby up for adoption. Deanna said at the time that Rosie didn’t like Chelsea talking to her and tried to tear them apart:What do you think?

“Rosie wants to paint me as a horrible person and says adopting Chelsea saved her from a life of misery. Rosie even hired someone to dig up my criminal record and gave it to Chelsea. But bless her heart, Chelsea told me the past was the past, and she loves me!”What do you think?

This whole situation is a wreck, but leaving home because you’re pissed at your mom is pretty common. I did it and I lasted about 45 minutes. Also, I have a feeling Chelsea will go back to Rosie’s house after spending 2 hours waiting in the line from hell to get a new birth certificate and social security card.What do you think?

And this mess is giving me “Losing Isaiah” vibes. Only in this version, Halle Berry is a white lady from Wisconsin, Jessica Lange is Rosie O’Donnell and Isaiah is a teenage ginger whose Tinder friend is in jail for allegedly texting her a dick pic.
Posted by Daniel at 8/27/2015 07:57:00 PM