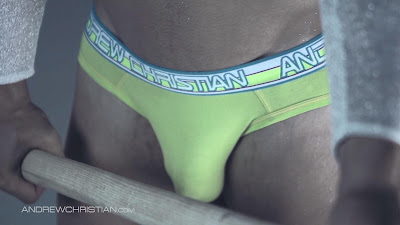 Andrew Christian, the maker of underwear that has cradled many a gay's dick, is the king of promotion. You'd be hard pressed to find a star in the industry who hasn't given a shout out to the designer on social media. You've most likely been surrounded by flopping Andrew Christian pouches at gay prides, weekends at Fire Island, or on Tuesday nights in your bedroom if you're a social butterfly like me.

The purveyor of buzz doesn't skimp on his promotional videos, which if you haven't seen, are WILD. The most recent cinematic piece License to Chill coincides with the release of the designer's new Black Underwear line. Here is the description of the video:

Set against the frigid and frozen backdrop of a fantastical land, the Andrew Christian Trophy Boys train to become the number one Ice Master. Under the watch of the Ice Spirit, played by Designer Andrew Christian, these boys fight in a dramatic display of power, technique, and awe. You might feel a little chilly once you discover who the winner is.

I don't know whether it's the dramatic the-moment-Claude-Frollo-falls-into-the-flames-in-The-Hunchback-Of-Notre-Dame music, the cinematography, the storyline, or those slow motion penis packages belonging to the Andrew Christian Trophy Boys, but I cannot get enough of this! Enjoy.
Posted by Daniel at 8/27/2015 01:00:00 AM