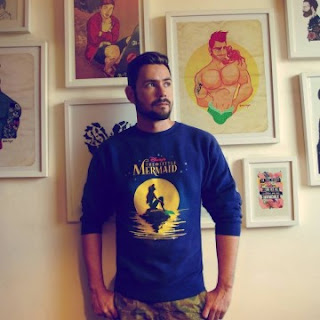 What happens when you combine influences from Tom of Finland, Disney and drag queens, and channel them into art? You get the work of Alfredo Roagui. The graphic designer and illustrator, who hails from Mexico, has been using these elements to create colorful and provocative drawings of beefy men, as well as the queens from RuPaul’s Drag Race. 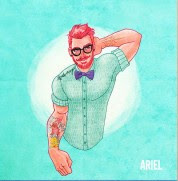 A self-described Disney freak, Roagui cites The Little Mermaid as changing his world when he was only ten years old. He recently explained the movie’s impact on his life to Buzzfeed, “Ariel is a bit of a rebel and a dreamer. I felt I could identify with her at that age. A boy identifying with a princess? How about that?” 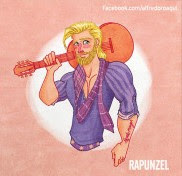 While Roagui feels that “Disney appeals to gay men because we still believe in fantasy and Prince Charming,” he would like to see some diversity in its prince and princess living happily ever after formula. 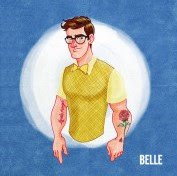 “What if we can tell new stories,” he said. “Maybe we’ll see a same-sex animated couple in the future. That would be awesome.”
Alfredo is so passionate about seeing a same-sex coupling from Disney, he has re-imagined a few of its iconic princesses as men. 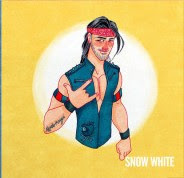 Disney has always shown strong support for the LGBT community. Earlier in the summer, one of its theme park stores made a bold statement about gender non-conforming youth by displaying a boy mannequin dressed in Minnie Mouse accessories. However, whether it’s putting a gay twist on a classic movie or introducing some queer characters in a completely new fairy tale, there is no indication that the company will be bringing a same-sex romance to life in an animated feature anytime soon. Hopefully someone who works there is paying attention to Alfredo Roagui’s artwork.
Posted by Daniel at 8/27/2015 05:17:00 PM