Holiday romance among the ornaments
From: The Grand Rapids Press 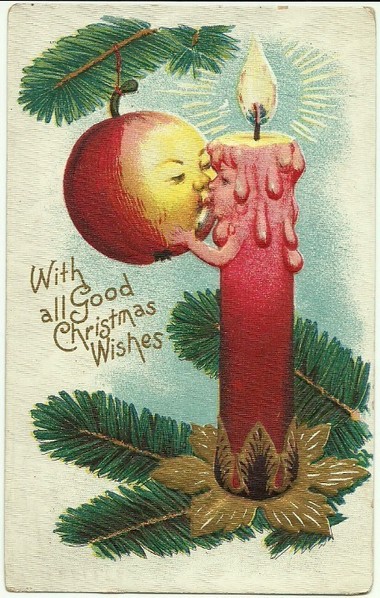 I confess I had no idea such things were going on as I placed ornaments on our family Christmas tree.

This week’s bad postcard continues our holiday theme, and this one might be even creepier than the “peeping Kringle” that got me in some hot water last week.

Santa has joined Tulip Time on the list of subjects deemed off-limits.

But since I’m apparently already on the naughty list, we might has well move ahead with this week’s postcard, which is from the same era as last week’s gem.

What’s more frightening, the idea of open flames on our indoor evergreens or anthropomorphic fruit and candles swapping spit without even a hint of mistletoe dangling above?

Apples, apparently, were a traditional ornament back in the day to remind us of Adam and Eve. They’re on my tree to remind me of the Homeland, also called “The Big Apple.” So I get that.

But there are other mysteries about this scene.

How come the candle has arms and the apple does not? Once you've made the artistic leap to decide that candles can have functioning appendages, why would you not extend that to the apple?

What does the unarmed apple see in the candle? Do they have anything in common, other than proximity? Or is this like New Year’s Eve, when everyone gets a kiss?

Did the apple instigate this? Would that make it "fresh fruit?"

Is this a casual fling, or does the wet, sloppy smooch come after three weeks of small talk and the apple humming, "Baby, It's Cold Outside."

Clearly it’s a short-term relationship. The candle can come back next year, but the apple becomes someone’s snack once the pile of cookies disappears. Maybe that's why he's living in the moment, flirting with danger, which is what that open flame seems to be. You go, brave apple!

And, are these the only two necking ornaments, or does the whole tree resemble a drive-in movie on date night when we turn out the lights?