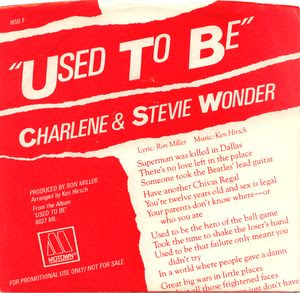 #2
“Used To Be”
Charlene and Stevie Wonder

Charlene followed up her subtle whoring with the album Used To Be, and the title song (a duet with Stevie Wonder) climbed all the way to #46 in December 1982, which is … frightening. It starts with “Superman was killed in Dallas …” and goes downhill from there. The hilariously awful closing line always leaves me simultaneously chortling, rolling my eyes, and banging my head against the wall. Oh Jesus …

Lest you think I’m picking on poor Charlene for giving her two of the top four slots, here’s a Charlene song that I actually love, the CAMPTASTIC “Fire” from The Last Dragon. No preaching, just pure 80’s synthpop.
Posted by Daniel at 8/27/2015 01:53:00 AM

Email ThisBlogThis!Share to TwitterShare to FacebookShare to Pinterest
Labels: 20 Worst Songs Of The 70′s and 80′s!, music, song