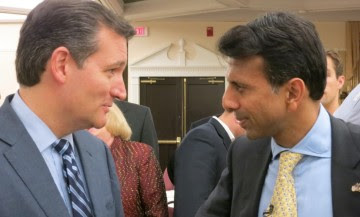 The only thing scarier than the National Organization for Marriage’s (NOM) presidential pledge is the fact that four actual human presidential candidates have signed the damn thing.
And we bet you can guess who.
Ted Cruz, Ben Carson and Bobby Jindal have joined Rick “Messy Bottom” Santorum in signing the appalling document, which promises to take a page from the Putin playbook regarding same-sex marriage if any of the clowns make it into the oval office, god forbid.
First, theres NOM’s big fish to fry — reversing the Supreme Court’s June marriage equality decision and amending the constitution to ban same-sex marriage once and for all. Because freedom?
But it isn’t enough to just ban gay couples from getting married. The pledge also seeks to do something about that pesky “shifting social landscape” by clamping down on, of all things, free speech. These four actual candidates (we reiterate because it defies all logic) have promised that if elected, they will “prevent the promotion of a redefined version of marriage in public schools and other government entities.”
So a children’s book that teaches kids it’s OK to have two mommies? Out of the question, burn it.
As a final farce, the pledge promises to, “direct the Department of Justice to investigate, document and publicize cases of Americans who have been harassed or threatened for exercising key civil rights to organize, to speak, to donate or to vote for marriage and to propose new protections, if needed.”
Yikes.
Posted by Daniel at 8/27/2015 04:49:00 PM