“Sexual Abuse is Something We Go Through and Not Something That We Are.”

From: I'm From Driftwood 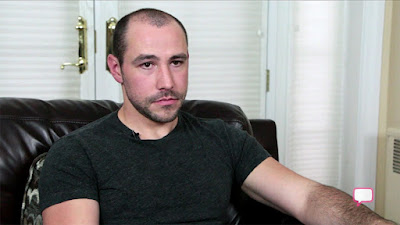 My name is Stephen Land and I’m originally from Phoenix, Arizona.

The minister actually went to the pastor of the church and told him that he was having feelings for me, told him that, I’m not sure if he was telling him that he was actually doing things to me but he literally went to the pastor and was telling him that he had these feelings for me and he liked me. The next time that I was in church with my family, my father is also a minister so we sat in the front row. The pastor stood behind the pulpit and he said that gays are an abomination to God and they’re damned to Hell. Instead of lending a hand to me and trying to figure out what was actually happening or trying to lend some kind of support to me, he was damning me to Hell. He was pushing me further and further away from God, he was pushing me further and further into the closet.

The sexual abuse continued throughout my childhood and young adulthood and I really couldn’t understand that the separation between being gay and being sexually abused because it just kept continuing.

I only had a couple years left of high school before I was going to go to college, and so all I had to do is get through high school. And in college is where I really started to understand what was happening. I started really understanding myself because there was, I was hanging out with gay people for the first time and I started really seeing that being gay was okay.

Me coming out was, I filmed myself on camera and I sent a disc of the film to all of my family members: my grandparents, my parents, my brothers and sisters. The video that I sent them was talking about the sexual abuse and being gay. It was like putting everything out there. I no longer had any secrets. Everything that I ever kept from anyone was in that video. I told them I was going to turn off my phone, cut off my Facebook, and I wanted them to watch the video and I didn’t want their initial reactions. I wanted them to really think about what they were going to say to me. The first phone call that I made after turning everything back on was to my family, to my parents, and they were like, “You’re going to move home, we’re coming to get you, and we’re going to talk about this as a family.”

Whenever big decisions come up within the family, we talk about them as a family and we make decisions as a family. And so, because they thought being gay was a choice, they wanted to sit down as a family and make a decision about if I was going to be gay or not. And I wasn’t going to let that happen. So my family and I, we didn’t talk for almost a year, but I made the decision to move to New York and even though I was living just a few blocks from my family, I called my dad and I told him that I wanted them to know that, and I thought it was important for them to know, that I was going to be moving to the other side of the country and I wanted to see them before I left. And we agreed to do a barbecue in the park and it was supposed to be me and my immediate family but they invited the aunts and uncles and the cousins, and all of these people that showed up to this barbecue saying, “Oh, goodbye, you’re moving to New York” were all of the people who didn’t want to have anything to do with me for the last year. But on the other hand, it was like, “Finally!” I get to see them, I get to hug their necks, I get to tell them I love them, and they get to see that I’m the same person.

There’s such a huge stigma around being sexually abused and being gay and tying those two together. And a lot of people try to connect the two. “You’re gay because you’re sexually abused” or “Because you were sexually abused, you’re gay” but they’re two separate things. Sexual abuse is something we go through and not something that we are. It’s not who we are.