Let them eat cake!
From: NewNowNext

A lot of kids were inspired by drag queens when creating their Halloween costumes this year, but 10-year-old Liam found his epic inspiration in another famous queen — Marie Antoinette. 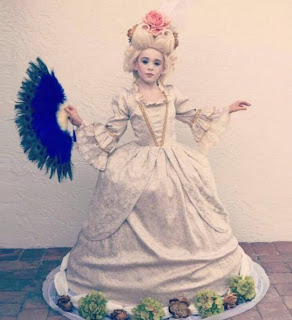 Liam is lucky enough to have two fathers who support and encourage his creativity, so when he reported that he wanted to be a royal queen this year, they helped him go all out.

“Me and his other dad found a wig and decided it wasn’t ’enough,’ so we purchased extra hair and Vin did the hair magic,” Liam’s father, Will, told The Gaily Grind.

“Instead of going too crazy with makeup, Liam watched tutorials and found out the true way they would have worn makeup,” he added. “The whiter the skin meant the higher the class status. Rouge was also very important.” 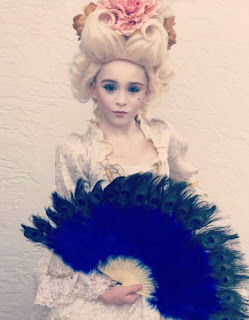 Despite the help from his fathers, Liam was in charge of most of the design, picking out “the fan, the flowers for hair, the embellishment of dress and the white ostrich feathers.”

The talented 10-year-old is no stranger to killing it in drag on Halloween, having made waves last year with his impressive Cruella de Vil costume. 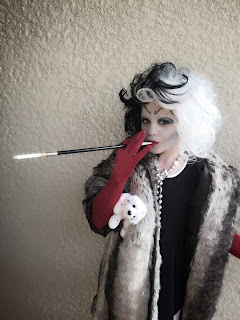 “It’s very typical for people to assume that because Liam has two dads, that we somehow guided him in this direction,” Will said of his son’s costume last year. “That is simply not the case.”

“We have had to discuss the fact that he may be met with adverse reactions when wearing this type of outfit to school on Halloween and even out on the evening trick-or-treating,” he added. “Fortunately, he has a great school and very good friends that didn’t give him a hard time.”