‘Notes From the Field’ Should Be Required Viewing for All Americans 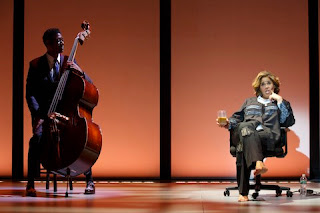 If you’ve bubbled up thinking about Trayvon Martin, Eric Garner, Sandra Bland, and so many others whose stories made headlines — and countless others whose names and fates we don’t hear about — this play will set you ablaze.

An intrepid artist who pioneered her own form of theater nearly 25 years ago, here Smith enacts a sprawling array of true-life personal narratives to examine America’s school-to-prison pipeline. Her kaleidoscopic investigation is composed of transcripts from her interviews with real people whose lives intersect with the system at various angles. (We hear from nearly 20; she conducted more than 250 interviews over the course of creating the project.) 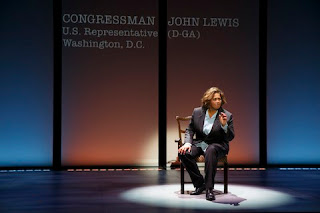 From the man who captured Freddie Gray’s violent arrest on video and the pastor who spoke at Gray’s funeral, to the principal at one of the most dangerous schools in the U.S. and activist and congressman John Lewis (D-GA), the stories Smith presents are almost overwhelming in the force of their impact and the light they shine at the root of our country’s greatest dilemmas. The cycle of poverty, the failures of our school system, the persistence of racism, the tyranny of the criminal justice system — the list only circles back on itself. 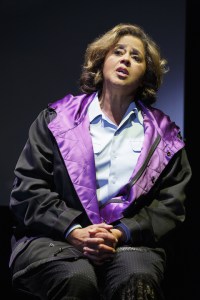 Bracing though this vision of the big picture may be, Smith’s approach is human in scale; many of her characters and their stories are as inspiring as they are enraging, as heartwarming as they are wrenching. Smith brings to life her subjects’ quirks — from certain words they might chew before speaking, to natural moments of humor they bring to conversation — lending just enough lightness to balance the grave subject at hand. These are real people, after all, and isn’t that how we all get through life?

Under the seamless direction of Leonard Foglia, the production also makes powerful use of video and projections, used to show both documentary-style evidence and to lend color and context to the events and characters Smith embodies. Composer Marcus Shelby imbues the piece with soul, playing well-deployed accompaniment on a standing bass and acting as a sounding board for Smith in occasional moments of call-and-response. 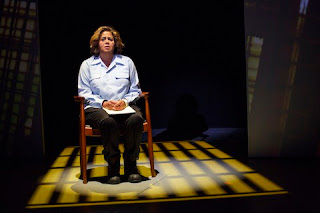 With minimal and often inspired costume changes (designed by Anne Hould-Ward), Smith shifts chameleon-like from one interview subject to the next. She doesn’t indulge in caricatures or do impressions, but has an unparalleled performance style all her own. In sympathizing with her subjects, Smith becomes a kind of uncanny medium, prioritizing the message over her own function as a vehicle, almost seeming to disappear.

That message is hardly one easily distilled into words, which is why Smith uses so many voices to tell it. If only every American had the opportunity, and capacity, to listen.
Posted by Daniel at 11/04/2016 07:35:00 PM