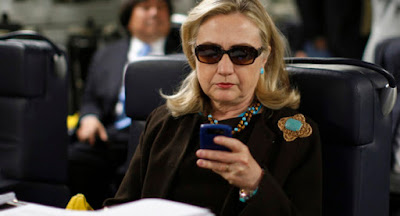 The last few days haven’t been kind to Hillary Clinton. FBI Director James Comey resurrected Clinton’s email woes with a maddeningly vague letter to Congress saying that the agency was taking “appropriate investigative steps” after learning that some additional emails may have turned up on another device. (Subsequent reporting said the device belonged to sexting fiend Anthony Weiner.) Comey’s actions have all the earmarks of a CYA action, particularly since he ignored Department of Justice policy in publicly commenting on an investigation in such an early stage.

So Clinton enters the final stretch of the campaign with a cloud hanging over her. Whether the cloud is legitimate or not is something we won’t know until well after Election Day. Considering how much ink has been spilled over her emails, it’s hard to believe that there’s a ticking bomb waiting to explode in the latest round. (The emails may be duplicates and may not even be from Clinton.)
But it’s a good time to stop and consider why Hillary deserves our backing. It’s not just because Trump is, well, Trump. It’s because Clinton has demonstrated that combination of steel and empathy that we will need to further our progress in the coming years.

Over the next 7 days lets look at some reminders of just a few of the reasons why we stand with HER. 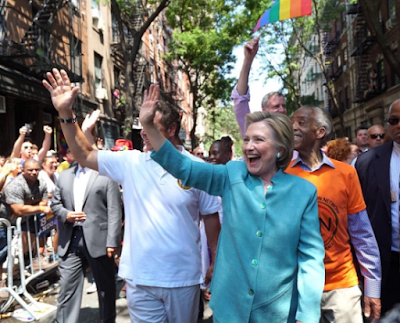 There’s no denying that Clinton is cautious, and that applied double to us. But once she made the leap, much like the president, she was all in, as her State Department record shows. That’s particularly important in this election, because the next president has the opportunity to press LGBT issues as a human rights cause–which is the explicit link that Clinton made in her landmark UN speech. Now that she’s embraced us unreservedly, she seems to be enjoying herself, as she did at New York City’s pride parade last June.
Posted by Daniel at 10/30/2016 06:54:00 PM

Email ThisBlogThis!Share to TwitterShare to FacebookShare to Pinterest
Labels: 7 Reasons We Love Hillary More Than Ever (And Not Just Because Of Trump), Democrat, politician