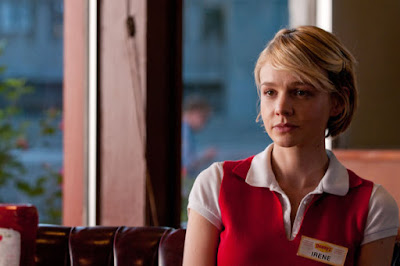 
Film
“Drive” (2011) is based on a novel of the same name and centers around a skilled Hollywood stuntman and getaway driver that runs into trouble when he tries to help out his neighbor, Irene.

Character’s Background
In the book, the stuntman’s neighbor is actually Irina — a young Latina woman in her twenties. In the movie, the character was re-written as Irene.

Actor’s Background
Danish director Nicolas Winding Refn said he re-wrote the character of Irina to be a white character because he couldn’t find a Latina actress he wanted to protect...?

“I couldn’t find any actress that would click with me personally,” he told The Huffington Post. “I couldn’t make a decision for some reason. I had all this talent in front of me and out of the blue I get a call from Carey because she wanted to meet me about doing a movie. She came by the house and she walked in and I realized, ‘Oh my God, this is what I was looking for. I wanted to protect her’ ... And I knew that was the Driver’s motivation.”

But these are just a handful of examples from a long list of cringe-worthy and shameless casting decisions in Hollywood. We could also talk about Emma Stone as part-Asian Allison Ng in “Aloha,” Justin Chatwin as Goku in “Dragonball: Evolution,” Fred Astaire in blackface in “Swing Time,” Rooney Mara as Tiger Lily in “Pan” — because it’s a seemingly never-ending story. And what have we learned after all this time?

This article has been updated to note that Neeson first appears in the role of Batman’s adversary Ra’s al Ghul in “Batman Begins,” which was not originally listed here. Neeson also briefly reprises his role as Ra’s al Ghul in “The Dark Knight Rises.”

Email ThisBlogThis!Share to TwitterShare to FacebookShare to Pinterest
Labels: 25 Times White Actors Played People Of Color And No One Really Gave A S**t