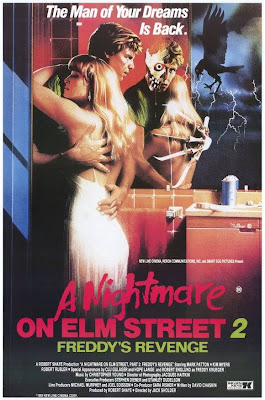 Well, of course it was going to be here somewhere. Honestly, the Elm Street franchise was never my favorite. It just became too goofy and muddled… although there were certainly some bright spots in all of the sequels (Dream Master had Tuesday Knight and Lisa Wilcox, and Dream Warriors had Patricia Arquette, Jennifer Rubin and of course, one of the greatest movie themes of all time.)

But Freddy’s Revenge will always have its place in horror history. So much has been written about the “subtext,” but let’s face it, there’s nothing sub about it. This is the gayest horror film ever made (besides Showgirls, of course), and while it’s not the scariest Elm Street, or the most well-made Elm Street, it will always be the most memorable Elm Street. Here’s one of my favorite scenes, as Jessie (Mark Patton) dances in his room, before he’s discovered by Mrs. Muir, and fetus Meryl Streep.