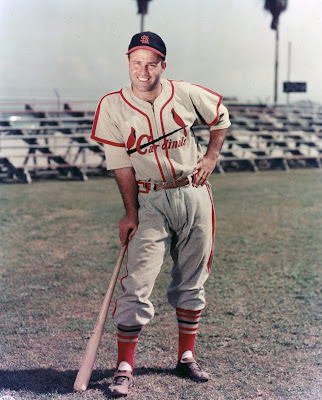 The Arizona Diamondbacks baseball team announced the news on Twitter.

“God I’ll miss Joe Garagiola. Was part of the soul of our show, and told me stories that made me laugh till I cried. Hall of fame person,” “Today” host Matt Lauer tweeted.

God I'll miss Joe Garagiola.
Was part of the soul of our show, and told me stories that made me laugh till I cried.
Hall of fame person.

Garagiola was a boyhood friend of Hall of Fame baseball player Yogi Berra in St. Louis, growing up in an Italian-American neighborhood known as The Hill. He began his major-league career as a catcher for the St. Louis Cardinals in 1946, winning a World Series in his rookie year and playing nine seasons and 676 games.

Garagiola became far better known for his upbeat personality, humor and wit, often making light of his lack of hitting prowess. He said of Berra, “Not only was I not the best catcher in the Major Leagues, I wasn’t even the best catcher on my street!”

His broadcasting career lasted far longer than his playing career. He became a broadcaster in the first season after he retired as a player, calling Cardinals radio broadcasts on KMOX from 1955 to 1962.

Garagiola authored a 1960 book “Baseball Is a Funny Game” about his upbringing and playing career, which helped establish him as a humorist. He began doing national baseball broadcasts for NBC in 1961 and called several World Series on NBC Radio in the 1960s.

After working on New York Yankees games from 1965 to 1967, Garagiola returned to NBC as the host of the pre-game show “The Baseball World of Joe Garagiola,” and then as a play-by-play announcer beginning in 1974 on the “Saturday Game of the Week” for NBC. His on-air partners included Curt Gowdy, Tony Kubek and Vin Scully.

Garagiola resigned from NBC Sports in 1988. From 1998 to 2012, he performed part-time color commentary duties for the Diamondbacks while his son, Joe Garagiola, Jr., served as general manager.

He won the Baseball Hall of Fame’s Ford Frick Award for Broadcasting in 1991 and was the 2014 recipient of the Buck O’Neil Lifetime Achievement Award, presented for positive contributions to Major League Baseball. The Hall’s announcement of the O’Neil award cited his advocacy against smokeless tobacco and his role as a founder of the Baseball Assistance Team charity.