Sergiy Stakhovsky: There Are No Gay Men in Pro Tennis, but Half the Women Are Lesbians 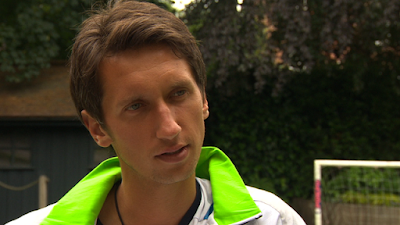 This one seems bright. Sergiy Stakhovsky, once best known as the man who ended Roger Federer's record run of 36 consecutive Grand Slam quarterfinals when he beat him in the second round of Wimbledon in 2013, has upgraded his idiotic comments about gay women on the professional tour to add men to the mix, of which he is certain there are none:
Via USA Today:

“If there are 100 guys, or 128 guys, I mean, if somebody’s different, he falls out, doesn’t he?” said Stakhovsky, ranked No. 60 in the world. “In a locker room, where half the guys walking in towels are naked, yeah, you definitely would see something different, no?”

Stakhovsky was quoted by a Ukrainian media outlet in July as saying that half of the women on the WTA were lesbians, and that he would never want his daughter to play tennis because of it. He said Thursday those quotes were misconstrued, but maintained his stance of lesbians in tennis.

“Through my years, I have a lot of great relationship with WTA players. So I do know how the WTA locker room is like,” he said, explaining that he is also friends with many male coaches on the WTA, who have told him about lesbians on tour. "It’s not like we’re going to mistreat somebody in the locker room, it doesn’t matter [if that] person is a homosexual or not to me. We live in a world where everybody has the right to be what he wants to be. Nobody can say anything to me, it’s my life, I can do whatever I want with it.” He continued: “For me, I don’t think the community in tennis would discriminate a gay if he would turn up.”

If his knuckle-dragging remarks were dispiriting in this day of LGBT equality, the reaction from various players -- including James Blake, Rennae Stubbs and Andy Roddick -- was cause for comfort.

“I’m not going to let one player’s comments define my sport as a whole. I think that’s a little naïve,” Roddick said. “I’m certainly not going to let someone express their views and let it delete the history of our sport and what we’re proud of. We accept and celebrate our champions regardless of who they are as people.”

Roddick said that if there is one gay male player, it doesn’t matter to him and he feels the tour would support him.

“I’m certainly not on the lookout. If there was [a gay male player], I have full confidence that people would go about their business as they would,” he said. “If it does come to fruition and is a reality and someone wants to do that, tennis will react in a great way. Trying to predict who is or who isn’t or am I surprised that no one has come out, that’s a game that I don’t choose to play. When it does become a relevant conversation, I have full confidence that tennis will carry itself well.”

Ironically, Damian and I accidentally sat down during Stakhovsky's second-round match Wednesday thinking it was Tommy "Am I or Aren't I?" Robredo's court. Needless to say, we moved. 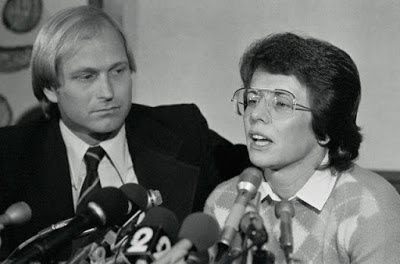 Overlooked this the first time around, but it's worth noting for those who clicked through to Nick McCarvel and Ava Wallace's piece in USA Today: Billie Jean King was NOT a "trailblazer as an out lesbian" during her career. As I detailed in my memoir, the tennis pioneer was outed by ex-lover Marilyn Barnett in 1981, yet still remained married to hubby Larry King for years, even playing up in the media the idea of adopting a child together afterward to distract people from her true sexuality. (She described the same-sex affair as merely a "mistake.") 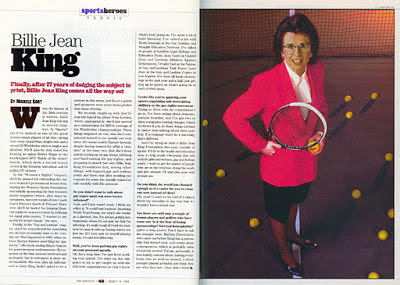 Although she divorced in 1987 and began living more openly, it wasn't until 1998 -- a good FIFTEEN YEARS after her retirement from the circuit -- that she publicly came out in an article in The Advocate, which just goes to show how difficult coming out is in sports, even for someone as influential as BJK. Martina Navratilova was also outed 1981 -- by The Daily News -- but was mostly forthright (give or take a "bisexual" label or two), which cost her untold sums in endorsement deals. She was the "trailblazer" here, not Billie Jean. Still, it wasn't until 18 years later that Amelie Mauresmo became the first player I know of to be forthright about her homosexuality -- on her own terms -- when she credited new love Sylvie Bourdon as being a key to her success at the 1999 Australian Open, where she reached the final at just 19. USA Today describes Mauresmo as having been "outed" at the tournament, but that's not how I recall it at all. Being asked and being honest is hardly outing. Since then, only a handful of gay players (Rennae Stubbs, Casey Dellacqua) have been open about their sexuality, yet bigger-name stars like Samantha Stosur continue to keep it to themselves. While it's highly unlikely that Sergiy Stakhovsky is right that half the women on the tour are lesbians, it's equally unlikely that there are only two or three. The incredibly low number of out players reveals just how depressingly little progress has been made in the past three decades, despite enormous societal gains around much of the world
Posted by Daniel at 9/08/2015 11:12:00 AM