From: Boomer Beefcake and Bonding 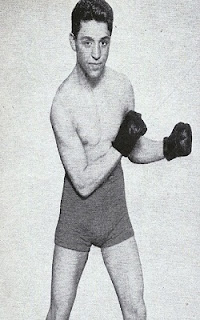 When I was growing up in Rock Island, I thought of it as a sleepy, boring small town.  The action was in Chicago, but that was three hours away, an infinite distance when you didn't have a car and had to be home by 9:00 on school nights.

But during the Jazz Age, Rock Island was a little Chicago, known for its hooch bars, prostitution, gangsters, gambling -- and boxing, giving the boys of the era ample opportunities for beefcake and bulge-watching.

This bulge worthy number is Sammy Mandell (1904-1967), acclaimed as the 13th greatest boxer who ever lived. Born Salverio Mandala in Sicily, he moved to Rock Island as a child.  In 1921, at the age of 15, he joined the army, and was stationed in Rockford.  Although just 5'6", he won every boxing and wrestling match he was in.

He had his first professional match that year, in Aurora, Illinois, against established boxer Memphis Pal Moore.  He won easily.

For the next 10 years, he won 143 of 190 fights.  He called himself the Rockford Flash, but fans called him the Rockford Sheik, because his sultry good looks were reminiscent of silent-film star Rudolph Valentino.

After he retired, he returned to Rockford, and opened the Pioneer Athletic Club. Gangster Al Capone managed his career for awhile: "I've always liked Mike," he said, "Both as a fighter and a man."

Ernest Hemingway said "The Little Blond bastard is built like a brick slaughterhouse."
.
He lost only 14 of 159 matches during the next 14 years.

I haven't been able to find out much about his later life, mainly due to the unfortunate coincidence of "Mike Dundee" also being the protagonist of the Crocodile Dundee movie.  But there's no wife and kids listed in the record. 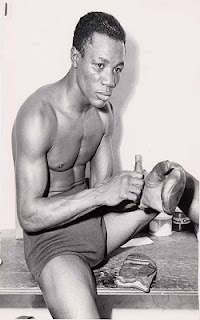 Rock Island's reputation as a boxing capital lasted through the 1930s and 1940s.  This bulge worthy lightweight is Tommy Campbell (1920-1969), known as the Chocolate Ice Cube, born in Kansas City but raised in Rock Island.  His professional career lasted for only six years, but during that time he won 350 of 443 fights, many by knockout.

After he retired in 1951, he opened the Davenport Athletic Club, and mentored two generations of kids. In high school, my friend Aaron and I used to go there on Sunday afternoons for beefcake-watching. 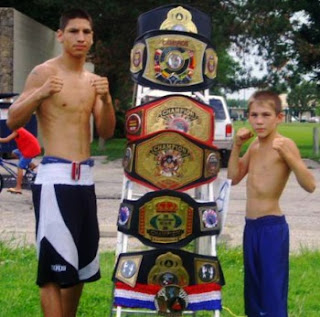 Boxing is still a passion among the young people of Rock Island.  The Rock Island Boxing Club on 2nd Avenue has been producing Silver Gloves champions (age 10-15) for 23 years.