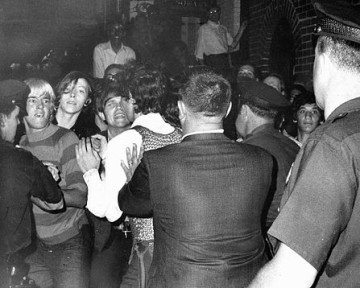 This year’s New York City Pride marks the 45th anniversary of the historic 1969 Stonewall riots.
At 1:20 a.m. on June 28, 1969, police raided the Stonewall Inn, a popular gay dive in the New York’s Greenwich Village. The evening quickly turned from raid to riot, with patrons refusing to hand over identification and fighting back against authorities. Only one known photograph was taken during the night of the riots. It appeared on the front page of the New York Daily News the following day and depicts several homeless youth taking on the police.
This event is widely considered the catalyst for the the modern gay rights movement, which has birthed many notable heroes – as well as some notable antiheroes. We couldn't possibly list them all, but we've done our best to compile a diverse list of 45 people — both well-known heroes and everyday folks, with a decided emphasis on the latter (no celebs) — who have made a lasting impression in the ongoing fight for equality. Please add your own suggestions in the comment section, and Happy Pride 2014.
To see more about what led to the progress of Pride 2014, make sure to tune in to Trailblazers on Thursday, June 26th at 9/8c on LOGOTV.
Watch the trailer for Logo’s Trailblazers below. 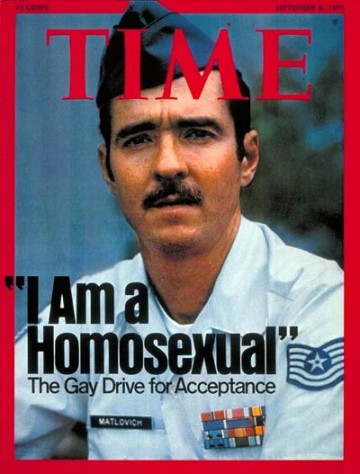 Sgt. Leonard Matlovich
Vietnam vet Sgt. Leonard Matlovich was the first gay man to disclose his sexual orientation in the military while serving in the U.S. Air Force. His photograph, along with the headline “I Am a Homosexual” appeared on the cover of the September 8, 1975 edition of TIME. In addition to being the first openly gay American soldier, Matlovich was also the first to appear on the cover of an American news magazine.
Posted by Daniel at 6/21/2014 04:04:00 PM