FORMER FASHION MODEL BECAME A MAN WITH QUITE A CUNT
Interview by Danny McFadden
Photography by Buck Angel
April 2, 2007
From: Butt 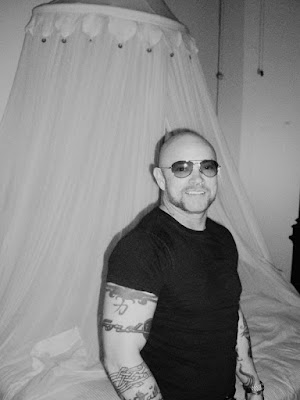 Raised a rather unhappy girl, Buck Angel is now more content describing himself as ‘the man with the pussy’. By his reckoning, he’s the only female-to-male transsexual porn star in the business. Prior to this current occupation, he was actually heading towards supermodel status when living as a woman. Buck currently resides in the Yucatan, Mexico, but travels regularly to LA, New York, London and Berlin to make and promote his work. He has a recent DVD out called Buckback Mountain, a title which kind of says it all. Some people ask Buck to work because of his freakishness, but he’s actually a really sweet guy. We’ve never met, but we talked over the phone.

Danny: You’ve recently been on an American talk show, no?
Buck: Yeah, I was on Maury Povich’s show.
What was the angle for the interview?
The main focus was on why would I change from that beautiful woman to this…this man. I had those pictures of me from when I was modeling and that was a huge thing for the producers. They just didn’t understand why I would go from that to this. They were really interested in why I wasn’t comfortable with that body and with being a model when a lot of girls would die for that opportunity. Especially when I had become this macho bald guy with tattoos instead.
Do a lot of people assume that you must have been a really butch woman to have become the man that you are?
All the time — but I was not some big, fat bulldyke. I’ve had comments that I must have been an ugly woman to want to become a man and, you know what, I wasn’t. But — while it sounds like a cliché — inside I’ve always felt like the man you see now.
So how was it being part of the fashion industry?
That was horrific for me. I ended up an alcoholic and a drug addict because I was so unhappy. I had no idea that there was a way out of my situation — nobody ever told me I had an option to become a man, because it was all so new. I got sucked into modeling — I don’t even know exactly how it happened — and I ended up on the books of both Elite Model Management and Z in London while doing a lot of work in Paris. At one point I was on the verge of becoming a top model, but I was just so wasted on drugs and alcohol and really disgusted with myself. I mean, a make-up artist would do my face and be so excited, but I couldn’t bring myself to look in the mirror. The whole thing was really traumatic.
Were there any aspects of the work that you enjoyed?
The money and the travel interested me. Now — looking back — I’m really excited that I did do it, because I think it adds more depth to my sex change.
How far do you think you could have gone with that career if you’d wanted to?
I was at the forefront of that androgynous thing in the eighties. I had so many opportunities, but I couldn’t get my head around it. So I screwed everything up. I was going to be represented by another agency in Paris and they were waiting for me at the station, and I never showed up.
Who had you been working for?
Remember the Boy label from London?
Yeah.
I did that and more of that kind of thing. Some sports stuff. A little runway, but mainly print. I wasn’t doing the big fashion names because, I think, my look was really new. Really different. It hadn’t really connected with the top, top designers of the time. The whole Jenny Shimizu thing and the Calvin Klein ads hadn’t really happened yet. The agencies were pushing me, but it was mainly through the younger designers that I was getting work.
Do you think that the fashion business has an unconventional approach to gender anyway?
How do you mean?