"Raise your hand if you believe in science!"

When Third Eye Blind was invited to perform at the 2012 Republican National Convention, lead singer Stephan Jenkins penned an op-ed about how the group refused to sing for a party dedicated to “exclusion.”

Many were surprised, then, to find that the group had accepted an invitation to perform at an un-officially sponsored RNC charity event in Cleveland this week. That was until it became clear that the band was using the opportunity to blast the Republican party. 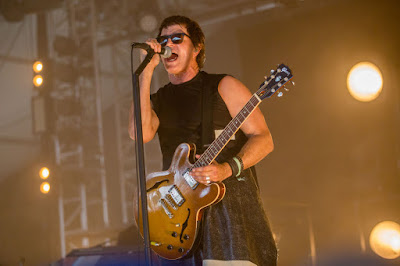 According to reports from Billboard, the group staged the concert at the Rock and Roll Hall of Fame to “repudiate” all the things the GOP stands for.

In addition to not playing any of their requested hits, the band talked about the need for “tolerance and acceptance,” and taunted the mostly-Republican crowd with questions like, “Raise your hand if you believe in science!”

When they did play one of their old songs, “Jumper,” which is about a gay man jumping off a bridge, Jenkins talked about the importance of bringing people like “my cousins, who are gay, into the American fabric.”

Though the audience jeered throughout the two-hour set, Jenkins exclaimed: “You can boo all you want, but I’m the motherf—in’ artist up here.”

After the concert, conservatives railed against the band for taking up space at a charity event to promote their personal politics.

"We used an event meant to aid suffering veterans and kids to troll for attention"
-@ThirdEyeBlind pic.twitter.com/EcC14GanzW

@FBillMcMorris @ThirdEyeBlind it gets even more pathetic when you realize they're all in their 40's & still acting like a teen garage band
— Jason Hornbuckle (@JasonHornbuckle) July 20, 2016

Liberals, however, praised Jenkins for using the event to troll the GOP.

That troll was funny but terrifying

Um, can we talk about how much I love @ThirdEyeBlind right now? Epic #RNC troll. https://t.co/8FKhrDmK7a
— Mindi Westhoff (@MindiLWesthoff) July 20, 2016