"Melania" defends herself against charges she plagiarized her RNC speech.
From: NewNowNext

Sometimes celebrities just have to embrace their similarities to unpopular figures. Tina Fey did it with Sarah Palin, and now Broadway’s Laura Benanti is doing it with Melania Trump. 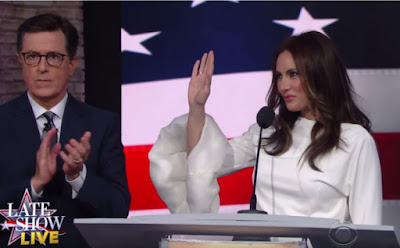 Benanti, who just appeared on stage in She Loves Me , hit The Late Show with Stephen Colbert and gave an impression of the Donald’s current spouse that was both rip-roaring funny and eerily uncanny.

We never thought they looked alike before, but when Benanti adopts Mrs. Trump Slovak accent and starts cribbing famous quotes, it’s like we’re back at the Quicken Loans arena in Cleveland.