The memorial will be presented at a Philadelphia meeting house on July 27.
From: NewNowNext

The award-winning Milk screenwriter will present a Philadelphia Conference Historic Marker at the Arch Street Meeting House, the site where 300 LGBT activists gathered to plan the 1979 National March on Washington for Lesbian and Gay Rights.

The activists gathered at the house a few short months after the assassination of San Francisco Supervisor Harvey Milk, a leading activist in the fight for LGBT equality.

There, they strategized and put into motion the steps that would lead to the groundbreaking 100,000-person demonstration in D.C., which many regard as a turning point in the LGBT civil rights movement. 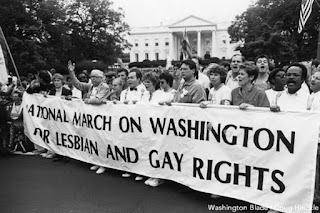 Organizers say Black was chosen to deliver the keynote address at the ceremony because of both his own activism and his connection to the late Milk, whom he immortalized in film. 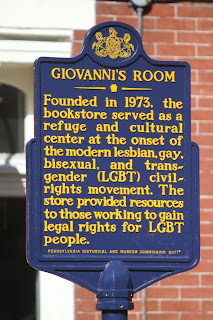 “Given Dustin’s Oscar-winning biopic of the late civil rights activist Harvey Milk, whose assassination inspired LGBT activists prompting the organization of the Philadelphia Conference, it’s an honor to have him dedicating this historic marker.”

The marker (which will look like the one pictured left) will not only memorialize the meeting house, but will also provide visitors with information about the landmark conference that took place there.