It's on.
From: NewNowNext

A month ago, a gun group was celebrating victory in in Washington, DC: District Court Judge Richard Leon had ruled that the District’s law regulating concealed weapons infringed on the Second Amendment’s “core right of self-defense.”

That it was a gay gun group that filed suit in the case is bitterly ironic in the wake of the mass shooting at Orlando’s Pulse nightclub that took 49 innocent lives and wounded 53 others.

Pink Pistols, an LGBT gun advocacy group with chapters around the country, first filed suit in 2008, claiming individuals had the right to carry weapons in public for self-protection, even against nonspecific threats. (DC law required specific cause to carry concealed firearms, not just a general fear of attack.) 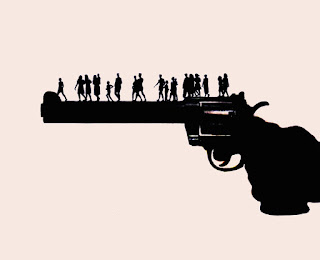 To them, Leon’s ruling meant the capital would be that much safer for LGBT people.


“We’re putting it out there that you don’t know which of the gay people out there are armed…. Don’t attack gay people because that could be a really bad decision.”

Patton says in the day following Sunday’s massacre, Pink Pistols membership has ballooned from 1,500 to 3,500.

But is turning the dance floor into the OK Corral how to address the crisis of gun violence in this country?

Conservatives have seized the opportunity to blame gun-control laws for the Orlando tragedy.

“Gun control advocates disarmed the victims at that night club,” declared Tom Palmer, a gay libertarian with the Cato Institute, in a Daily News op-ed. 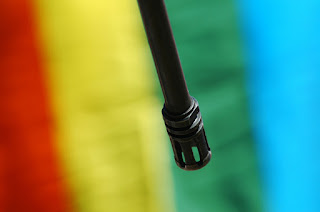 Pundit on Fox News—who just a week ago were painting LGBT people as perverts who want to attack children in bathrooms—have also emerged as “allies.”

“It’s kind of homophobic to think a gay club that serves alcohol can’t have people in there with guns,” declared Fox’s Greg Gutfeld on Friday.

But judging by articles and social media this past week, the majority of LGBT people support sane reforms, like bans on assault weapons and blocking people on no-fly lists from obtaining gun permits.

It’s not a bad idea for the LGBT community to make a show of strength. But we don’t need guns to do it—we’ve proven we win our battles in the courts and legislatures.

Every minority fighting for its rights, for its very existence, has debated whether to embrace violence. From Irgun to Sinn Fein to the Black Panther Party, we’ve seen it time and time again.

But it gets you nowhere—violence only begets more violence. 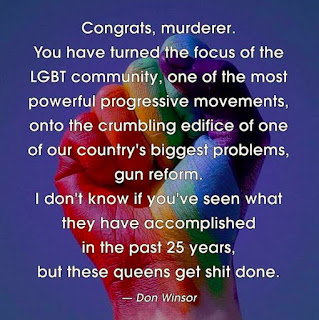 There’s a lot of blame to assign in the wake of Orlando—at family members who did nothing despite red flags, at federal authorities who missed the signs, at an ideology that fosters toxic homophobia (and a nation that does the same).

And at the National Rifle Association, which has used its significant power to block any and all attempts at gun reform.

The Human Rights Campaign put the NRA in its sights on Friday, pledging to support gun control legislation.

“Forty-nine members of our community were murdered on Sunday morning because of a toxic combination of two things: a deranged, unstable individual who had been conditioned to hate LGBTQ people, and easy access to military-style guns,” HRC president Chad Griffin said in a statement.

“It is imperative that we address both issues in order to mitigate safety risk to our community.”

Fixing the ideological problems in America that contributed to the deaths of 49 innocent people could take decades, if it’s possible at all. By comparison, taking on a lobbying group that bankrolls death is a cakewalk.

Email ThisBlogThis!Share to TwitterShare to FacebookShare to Pinterest
Labels: FYI