A gay man’s dreams came true at his dodgeball tournament recently, when a flash mob formed and performed a medley of pop hits as part of his boyfriend’s planned flash mob proposal.

“[Angelo] has no idea he’s about to see a group of his friends start dancing to some of his favorite songs,” his boyfriend, Mike, wrote as he posted the video. “But why wasn’t he invited to dance?!?!” 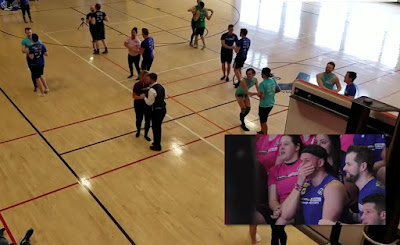 The mob, which included players across multiple teams in the tournament, performs Lady Gaga’s “G.U.Y.” and Whitney Houston’s “I’m Your Baby Tonight” before Mike appears in a suit and tie to perform Jason Derulo’s “Trumpets” and Bruno Mars’ “Marry You” with the group. 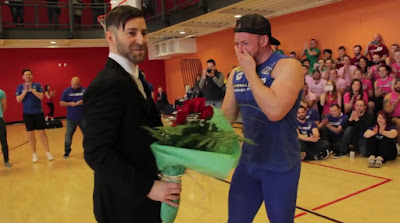 As the song fades, Michael pulls Angelo from the audience and says, “I love you, you mean the world to me. Will you marry me?” 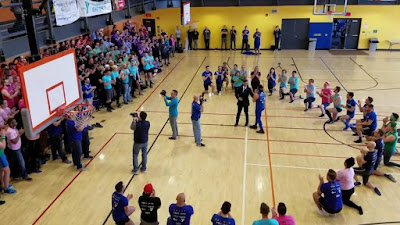 Said Mike: “He no idea this was coming and his reaction was everything I had hoped for, priceless! To all the people who helped me put this event together, thank you from the bottom of my heart. Thank you friends, thank you family and thank you Stonewall Sports Pittsburgh! Here’s to a new chapter! I love you all!”

Email ThisBlogThis!Share to TwitterShare to FacebookShare to Pinterest
Labels: dodgeball, Gay Marriage Proposal of the Day