"Rent seemed to give a lot of people permission to change their life or to step into their own voice."
From: NewNowNext

Twenty-nine past and present performers of Rent from all over the world (including Cuba!) gathered together on stage to celebrate the musical’s impact by performing the “Seasons of Love” at Broadway Sings For Pride. 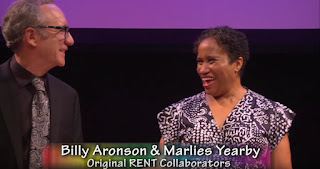 Introduced by the show’s original Tony-nominated choreographer, Marlies Yearby, and Rent scribe Jonathan Larson’s collaborator, Billy Aronson, the evening kicked off with a look back at the legacy that first started 20 years ago.

“When I first began working on Rent with Jonathan Larson a long time ago, I was aware that he was really struggling to feel proud of who he was as a young artist against all the forces that can make you feel ashamed and useless at that time… and now,” remarked Aronson. “But as he worked on Rent, things changed.”

“Rent seemed to give a lot of people permission to change their life or to step into their own voice” Yearby said with tears forming in her eyes.

The legacy of Rent performance included original company members from Canada, London, Australia, Cuba, national tours, regional tours “and on and on and on.”