Now we're getting into the meat of my fantasy life as a kid—Matt Dillon was it for me. Classically good-looking, he also had the requisite shiny '70s hair (and those/that eyebrows/eyebrow!) and, later, looked just as good with it cropped short. He had a matter-of-fact quality about his sexuality on screen, a directness that was remarkable for a teenager.

I walked past him on the street in the Village once when we were both quite grown and yet I still felt like a kid with a pinup on his wall and certainly didn't stop him to say anything—I'm sure this was one of my only cases of being starstruck. The ultimate '80s de-virginizer. It's harder to find a shirtful picture of Matt Dillon than a shirtless one. 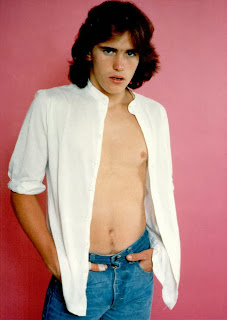