Ross was a stand-out at Broadway Bares in the spring as a light-footed leading man for Laverne Cox, definitely catching my attention and earning a big spot in my wrap-up of the show: 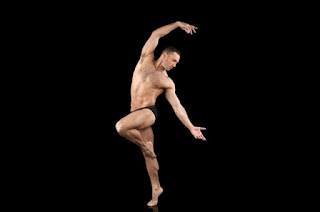 ... the new (to me) dancer who caught my eye the most effortlessly this year, Casey Lee Ross.

With his Gene Kelly build and clingy suit, he throbbed with alpha-male libido, perfectly complimented by a totally game Laverne Cox. Cox, the show's surprise guest star, bared a lot of skin in her corset and pasties and aggressively matched Ross's animal lust with her own. When he ground his face into her crotch, it felt like a breakthrough in gay/trans relations and also like a sketch for a full musical I'd love to see on the Great Black-and-White Way.

I eventually ran into Ross on the street after I'd posted some items about him; it was one of those awkward moments when an attention-seeking performer gets recognized by an attention-giving admirer in an unexpected setting, but I'm big on saying hello when I see someone I recognize. He was gracious.

Ross just recently popped up on SNL, giving Amy Poehler a hand—and more. Make sure to follow him on Instagram, a veritable pectoral pictorial.
Posted by Daniel at 3/14/2016 07:36:00 AM