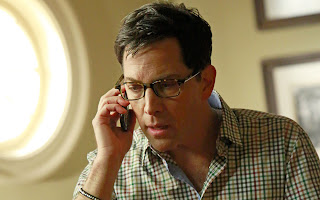 Dan Bucatinsky
as
James Novack
on
Scandal
Episode
"Nobody Likes Babies"
ABC
When we last left Hollis Doyle, he was stepping into an elevator with the man who is planning to kill him. Huck hops inside the car before the doors close. He stops Charlie from carrying out the hit. Cyrus is in shock when Olivia reveals that Hollis didn't try to kill the president. In other news, Fitz and Mellie take part in a photo shoot to give the world its first look at their new baby boy. They play nice until the PR moment is done. Fitz is still moving forward with divorce plans. He knows Mellie induced labor to manipulate him. He asks Olivia to wait for him as he kisses and caresses her. She’ll have to think about that one.

Supreme Court Justice Verna Thornton is the person who hired Becky to assassinate the president. Olivia figures this out, but knows she can’t turn her in. Verna says, “Confessing does more harm than good.” If that’s true, then why does she make a call to David Rosen? Even though the persistent U.S. Attorney was summoned to Verna’s hospital room, he’s blocked from seeing her. That’s because she already has a visitor. Fitz is in her room. He screams for help when Verna stops breathing. Efforts to revive her are unsuccessful. Verna Thornton is dead.

Fitz wears a troubled look on his face as he gazes out the window of the Oval Office. Cyrus is ordered to assemble a list of possible replacement justices before meeting up with Mellie in the hallway. The First Lady would rather be where the action is than with her new child. Cyrus feels the same way because, as the Mellie so eloquently puts it… “Nobody likes babies.” Mellie also assures Cyrus that she will go nuclear if Fitz goes public with his divorce thoughts. After she destroys her hubby, she’ll run for office herself. Good to know.

Olivia needs know what kind of information David has uncovered. Thankfully, “Bobblehead” lives. Bobblehead, by the way, is the name Olivia and Huck have for the listening device they placed in amongst David’s shelf of collectibles with wobbly oversized noggins. Abby wants all recordings with R-rated material left for her to ears only. One of the CDs reveals that David is in possession of the memory card that was used to rig the election. Abby mentions he has a safe in his office. She later hears a recording of David saying he loves her while she was asleep.

Abby asks Olivia if she paid David’s ex to say that he beat her. The answer is yes. Abby knows Harrison was the payoff man. She’s furious, but Harrison makes an impassioned speech declaring that he only did what he did because he’s a gladiator just like her. Abby shows up at David’s door to say she loves him, too. The two of them spend the night together. David leaves Abby alone in his apartment as he goes off to work. He has a big case to present to the grand jury. The election rigging scandal is about to go public.


James is subpoenaed to appear before the grand jury. He confronts his hubby about his role in fixing the election. Cyrus makes James strip to make sure he isn't wearing a wire. After both men are completely naked in the middle of the bedroom, Cy admits that he stole the White House. It was the only way he could run the country without actually becoming president. Cyrus is visibly worried when James says he’s going to do whatever it takes to protect their new baby. He places a call to Charlie. He has a job for him.