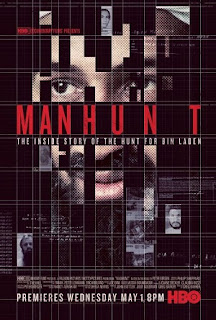 Manhunt: The Search for Bin Laden
HBO
Manhunt: The Search for Bin Laden is a 2013 documentary directed by Greg Barker that explores the CIA's investigation of Osama bin Laden starting from 1995 till his death in 2011. It was premiered on HBO on May 1, 2013, two years after the mission that killed bin Laden in May 2011. The documentary features narratives by many of the CIA analysts, operatives who worked over almost two decades understanding and then tracking bin Laden and also includes archival film footage across Washington, D.C., Pakistan, Saudi Arabia and elsewhere in the Middle East. It also features extensive and rarely seen footage of Al-Qaeda training and propaganda videos, including digital suicide notes from various terrorists who later worked as suicide bombers.
On release, the documentary was noted as a "less Hollywood-ized version" of the film Zero Dark Thirty (2012) and appreciated for showcasing "the nitty-gritty" of decade-long search for Bin Laden and the CIA analysts' job. It was acknowledged for putting "a human face on the secret world of intelligence gathering". The documentary was selected for 2013 Sundance Film Festival and was part of U.S. Documentary Competition. Three CIA agents featured in the documentary; Marty Martin, Nada Bakos and Cindy Storer; also attended the discussion about the documentary after its premier in the festival.
The director of the film, Greg Barker, noted that it was difficult to trace down the individuals who worked for the CIA but did not have any exposure. He also mentioned that as the CIA did not have any approval over the content of the film. Interviewees had to make sure that they did not reveal any classified information.
Posted by Daniel at 9/16/2013 09:51:00 PM