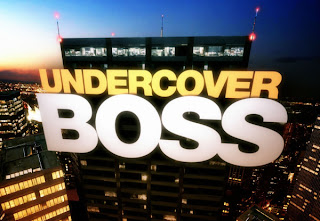 Undercover Boss is an Emmy Award winning American 2010 reality television series, based on the British series of the same name and produced by Studio Lambert in both countries. Each episode depicts a person who has a high management position at a major business, deciding to become undercover as an entry-level employee to discover the faults in the company. The first series consisted of nine episodes produced in 2009 and first aired on February 7, 2010, on CBS. Companies that appear on the series are assured that the show will not damage their corporate brand.
Posted by Daniel at 9/16/2013 07:05:00 PM