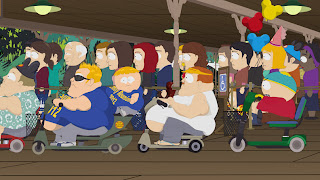 South Park
Episode: "Raising the Bar"
Comedy Central
"Raising the Bar" is the ninth episode of the sixteenth season of the American animated sitcom South Park, and the 232nd episode of the series overall. It premiered on Comedy Central in the United States on October 3, 2012 and is rated TV-MA L.
In the episode, Cartman comes to accept that he is obese. However, rather than resolving to lose weight, he concludes that he is entitled to using a mobility scooter for transportation. This attitude is shamelessly embraced by other obese persons throughout the country, including reality television personality and pageant participant Alana "Honey Boo Boo" Thompson. As standards of decency continue to deteriorate – culminating in Cartman and Honey Boo Boo being pitted against each other in a "sketti"-wrestling match on the White House South Lawn – James Cameron ventures into the ocean depths to find and raise the bar to more dignified levels.