You Were Right: Batman And Robin Have Been Super Gay Since Forever 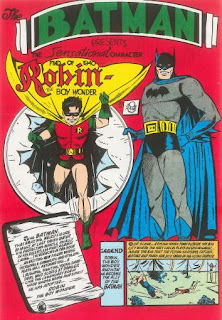 The homoerotic subtext has been woven into the DNA of Batman and Robin since the 1940s, though it hasn’t been quite explored…until now.

Over at Slate, author Glen Weldon unpacks the gay-ish portions of his new book The Caped Crusade: Batman and the Rise of Nerd Culture to prove the uber-gayness of the Bat and his Boy Wonder wasn’t just in your mind.

In fact, a publishing blunder made it painfully explicit right from the start:

"The opening page of Robin’s debut story in the April 1940 issue of Detective Comics No. 38 featured an introductory scroll jammed with breathless declamatory copy about “THE SENSATIONAL CHARACTER FIND OF 1940 … ROBIN, THE BOY WONDER!”
But the page’s letterer, tasked with squeezing a hell of a lot of text onto said scroll, unwittingly shoved the words “an” and “ally” so closely together as to effectively elide the space between them. Thus, the first thing readers ever learned about THE SENSATIONAL CHARACTER FIND OF 1940 was that he was someone whom Batman “took under his protecting mantle anally …" 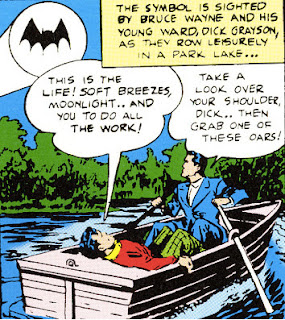 After the Boy Wonder’s parents are murdered by the mob, he’s taken in by Bruce Wayne, setting up what seems like an extraordinary amount of mano a mano leisure time:

Thus young Dick became Bruce Wayne’s ward, and many stories in the ’40s and ’50s began by depicting the man and boy engaged together in some leisure-time pursuit. Again and again, however, said tableaux stubbornly bore a romantic, lavender-scented shading. 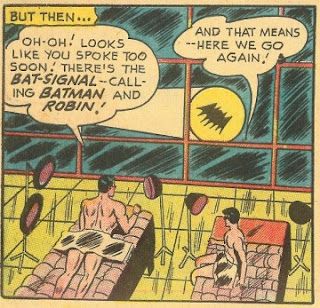 Take 1942’s Batman No. 13, which saw Bruce and Dick Owl-and-Pussycatting it up in a rowboat on a pond in a Gotham City park. Just the two of them. At night. Or the panel of World’s Finest No. 59 from 1952, in which naked Bruce and Dick lie next to one another, languidly bronzing their brawny physiques under matching sun lamps. 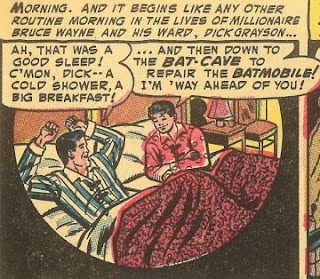 Oh yeah, in one legendary panel, the duo even woke up in bed together:

Batman No. 84 hit newsstands in April 1954, during Wertham’s Senate testimony. Its story “Ten Nights of Fear” begins with one of the most infamous panels in Batman’s 77-year history: Bruce and Dick waking up in bed together. “Morning,” reads the narration. “And it begins like any other routine morning in the lives of millionaire Bruce Wayne and his ward, Dick Grayson …” We are thus explicitly told that this sharing of Bruce’s bed is common Bat-practice.