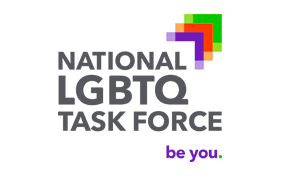 In the wake of Donald Trump's outrageous proposal to bar all Muslims from entering the U.S, it's nice to see the National LGBTQ Task Force condemning his remarks. They probably realize what should be obvious—many LGBTQ people are Muslim or have family members or friends who are Muslim:

We wholeheartedly condemn and reject Donald Trump’s call to stop Muslims from entering the United States. Moreover, we believe that his comments about Muslims reveal all you need to know about him. First, there are no standards of decency, no limits to where he will go to grab attention in his quest to win the Republican Party nomination. He is willing to attack, alienate, and cause harm to anyone for political gain, regardless of the impact on people’s lives or the divisiveness he feeds. Second, this is someone who does not learn from history. The same xenophobic frame-of-mind led to the appalling injustice of interning Japanese Americans during World War II. The legacy of that injustice lives on—in the Priority Enforcement Program run by the Dept. of Homeland Security, which targets Muslim immigrants for deportation, and in the climate of racism that puts all Muslims, Arabs, and South Asians at risk of harassment and violence. Finally, words are weapons. Do we really want someone who—we can see from his words—fires first and aims later to have his finger on the world's biggest arsenal of weapons of mass destruction?" said Rea Carey, Executive Director, National LGBTQ Task Force Action Fund.

Email ThisBlogThis!Share to TwitterShare to FacebookShare to Pinterest
Labels: news