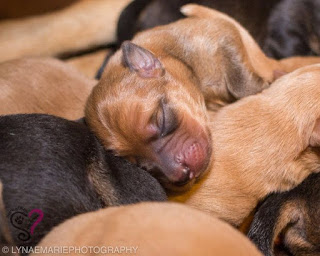 The snuggly one with the pale fur could be Atwater's Dirty Blonde. Its litter mate with the red hue to his fur could be Founders' Rubaeus or maybe Brewery Vivant's Pumpkintart. Their dark-furred brother? How about Elk Brewing's Dankalicious. 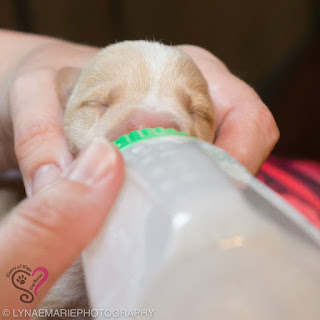 A West Michigan dog rescue group is asking the state's celebrated craft breweries to step up for charity and pick out names for a surprisingly large batch of 13 puppies born to an injured dog in its care. 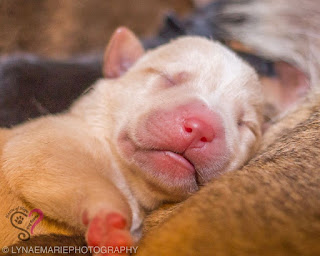 Hearts of Hope has a lot of beer lovers among its members and volunteers, so a friendly competition among brewers in Grand Rapids' "Beer City USA" and beyond seemed to make sense. In exchange for a $100 donation, a brewery will get to name a pup and receive a professional portrait of their staff and the pup. 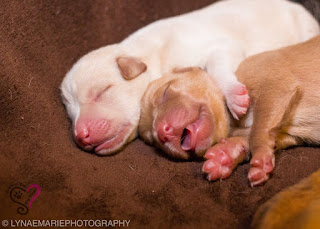 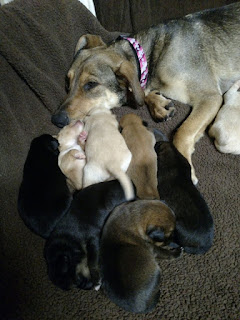 When the little dogs are big enough to go to adoptive homes in mid-July, rescue founder Janelle McFarlane won't be surprised if the new owners decide to keep the creative names thought up by the brains behind some of the country's best beer monikers. 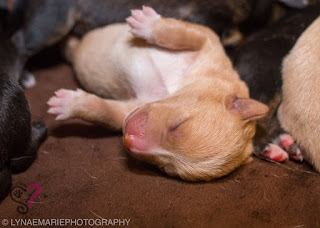 She kicked off the trend by naming the injured mother dog Harmony Irene, after Harmony Brewing in Grand Rapids. 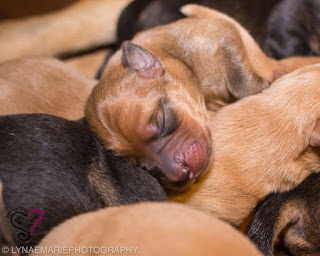 When the very pregnant, lanky shepherd mix came into the Kent County Animal Shelter a couple weeks ago, she was holding up an injured paw. 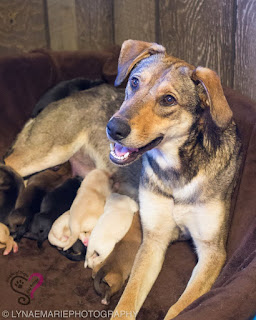 Someone in a rural area had seen the mom-to-be running around and thought it was a good idea to put out a coyote trap to catch her. It caught her, puncturing her skin in places and causing her to favor her swollen leg. 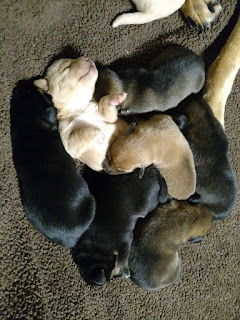 When no one claimed her as a stray, the shelter called Hearts of Hope. The nonprofit places dogs in a network of foster homes until adopters can be found - a nice option for animals who are pregnant, sick, or who might have anxiety issues when left too long in a loud shelter. Since it started five years ago, the group has placed more than 1,100 dogs. 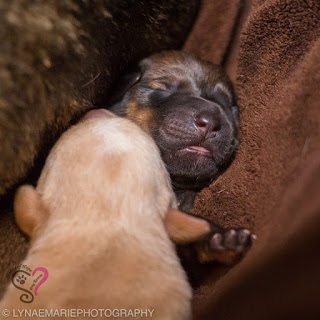 Because Harmony was pregnant, she could not have pain medication. But when the puppies began to arrive a week ago, McFarlane said the cycle of bedrest, eating small meals, and nursing the little ones has forced the 2-year-old dog to limit her activity, and that's helped Harmony heal. 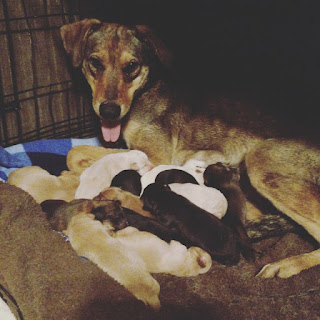 At 13, it's the largest litter of puppies Hearts of Hope has handled. The shelter had estimated Harmony would have six to eight. 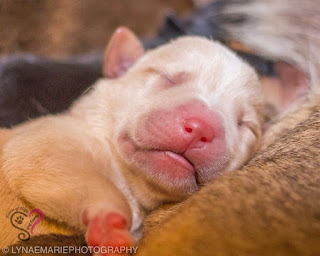 McFarlane said she knew that guess was really low when the puppies started being born. 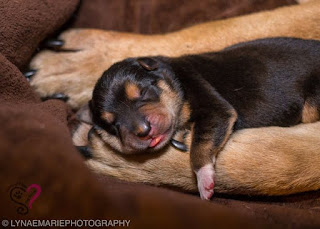 Harmony delivered them in batches between 6 a.m and 7:30 p.m. that day.

They are cute little bundles. All are healthy, and are being nursed by their mom in shifts. McFarlane is also supplementing with bottle feeding.

Judging by their looks, the father of this crowd is likely a Labrador retriever.

Volunteers and the community have shown a lot of support in the last week, donating food, puppy pads and baby wipes.

Once enough breweries sign on to label the big family, Hearts of Hope will do a big reveal of all the puppy names.

And when the puppies have all been weaned, the group can turn its attention to Harmony. The new mom tested positive for heartworm - which does not transfer to her puppies. Once she is no longer nursing, she can be treated for that condition.

McFarlane expects Harmony to stay with her for the summer, until she gets a clean checkup and can be placed in a new home of her own.

Email ThisBlogThis!Share to TwitterShare to FacebookShare to Pinterest
Labels: dogs