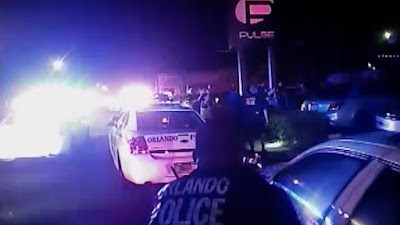 New Pulse Nightclub footage shows the response through police officers’ eyes — from initial confusion to shock as they began to understand the scope of the attack that killed 49 people in Orlando on June 12.

More than 30 videos offer the most complete picture of what happened during the three-hour standoff.

In the body camera video released this week by the city of Orlando, Belle Isle Police Officer Brandon Cornwell entered the club through a large broken window near the front door and took cover behind a bar as Orlando police officers yelled commands toward the bathroom where gunman Omar Mateen had cornered survivors.

At 2:17 a.m., an officer started to scream and a barrage of shots could be heard. Orlando Police Chief John Mina has said officers fired at Mateen but did not hit him. Mateen did not fire at officers at that point, he said.

A couple minutes later, an officer yelled: “You, in the bathroom, let me see your hands now. Come out with your hands up, or you will die.”

Cornwell said a prayer to himself.

“Lord Jesus, watch over me,” he said.

"I couldn’t see the guy,” he later told another officer in a conversation captured on his body camera. “He came out of the left bathroom and we were stacked up, and the guys that were up front just started shooting right at him. And he went back into the bathroom. As soon as he came out, I saw like a dark-colored shirt ... and about that time they started firing at him, but I couldn’t open up on him."

The 15 new hours of footage given to the Orlando Sentinel through a public records request initially made nearly a year ago was redacted, and none of the people who died that night are shown.

Body cameras in this latest release captured officers encouraging victims to crawl out of the club, racing to the scene, talking about the many victims inside and the need for bomb dogs, and just waiting outside for further instructions. Patrons were frisked as they were rescued.

Orlando Police Officer Graham Cage’s body cam captures the scene of another officer cautiously leading a victim out of one of the bathrooms and down a hallway.

“Hands up, both hands, put your hands up,” the officer says off-camera. “Follow the sound of my voice. Come this way. Show me your [expletive] hands! … I need you to crawl this way. … Follow my light.”

The Orange County Sheriff's Office released its own body cam footage from that night in November. Those two dozen videos showed officers clearing the entrance, one of the bathrooms, helping victims outside and pulling victims out of the building after it was breached by the Orlando Police Department.

In another video, chaos unfolded simultaneously in the bright white hallways of Orlando Regional Medical Center, after rumors of a second shooter at the hospital reached officers in the middle of the standoff. Footage from Orlando Police Officer Matthew Davis showed a team sweeping the hospital for a “bad guy.”

With a long gun drawn in front of him, Davis and other officers followed a trail of blood down the stairs to the basement and back up to the first floor, but they found nothing.

“Does anybody know where this blood is going?” someone asked.

A hospital worker told them a bleeding patient was taken to a room on the sixth floor and described the patient. They went upstairs to that room, but he wasn’t there.

Seconds later, they spotted a man down the hall who fit the description.

“You, here, down the hall,” one officer yells, as the man ducks into a room. “Hey, hey, hey, where are you at? Come here! Let me see your hands!”

Footage then shows the man splayed on the ground, cuffed, with a white sneaker on his right foot and a gunshot in his left foot.

It’s determined that he is a patient – and he is taken to the ER.

“We’ll obviously get him treated and everything,” Davis says. “But we’re gonna keep someone with him until we can figure out who he is.”

The report of a shooter at the hospital turned out to be unsubstantiated.

Belle Isle Police Officer Jon-Paul Gargano ran back to his car about 2:45 a.m. to get a roll of paper towels from the trunk.

He found a woman sitting on the sidewalk nearby.

“We can't; there’s more victims in there. We start to shoot, we might shoot other people,” Gargano said, running back to his post in front of the club.

“[Expletive] go in there and shoot his [expletive], man,” she called after him.