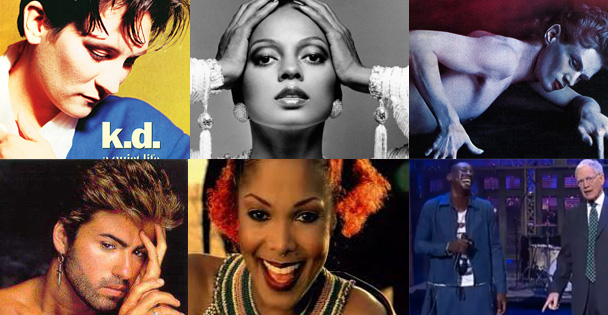 To commemorate Pride Month, Billboard ranked 25 of the greatest gay moments in music – from Madonna stealing popularizing voguing, to Elton John and David Furnish getting married; from Lady Gaga fighting for LGBT rights to Frank Ocean coming clean about his sexuality and Macklemore and Ryan Lewis serenading same-sex couples at the Grammys. It’s a pretty comprehensive list, but there’s still a lot of great queer moments they missed. Here are 10 such moments, in no particular order:

Besides creating  one of the greatest gay anthems of all time — 1980′s Chic-produced “I’m Coming Out” — Ms. Ross threw open her caped arms and embraced her LGBT fans for a cover of another gay anthem, “I Will Survive.” The video, shot in West Hollywood during a Pride celebration, the Supreme Diva was joined by none other than the Supreme Drag Queen, RuPaul, along with a gaggle of other queens all serving their best Night of 1,000 Dianas drag.
Posted by Daniel at 6/12/2014 03:14:00 PM