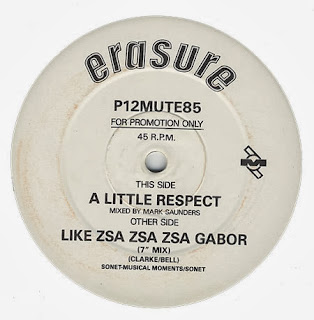 Erasure
"A Little Respect"
1988
"A Little Respect" is a song written and recorded by British synthpop duo Erasure, released in September 1988 as their tenth single. It was issued as the third European (and second American) single from their album The Innocents.
Known as one of their signature tunes, "A Little Respect" continued Erasure's success on the UK Singles Chart, where it hit number four to become the band's fifth Top 10 single. It was also Erasure's second consecutive Top 20 hit on the Billboard Hot 100, where it climbed to number 14, and hit number two on the U.S. Hot Dance Club Songs chart. In the U.K. Mark Saunders and Phil Legg provided the remixes, for the U.S. the remixes were made by Justin Strauss.
Written by Erasure members Vince Clarke and Andy Bell, the heavily synthesized instrumentation is accentuated by acoustic guitar and Bell's use of falsetto in the chorus. The lyrics are an empowering plea to a lover to show compassion and respect.
An acoustic version of "A Little Respect" is featured on the Moon & the Sky Plus EP in the UK. The song was remixed in 2006 by Jaded Alliance for the Future Retro compilation, and again in 2009 by Avantara for the Pop! Remixed album and EP and by Wayne G & Andy Allder for inclusion on the Phantom Bride EP.
Erasure remixed and re-released the track in December 2010 as a digital download-only single for charity. Proceeds from the sale of the single benefit the Hetrick-Martin Institute, the home of the Harvey Milk High School in New York, and the True Colors Fund. Called the "HMI Redux", it includes additional vocals from the Hetrick-Martin Institute youth chorus. Numerous HMI youth were featured in the "HMI Redux" music video that accompanied the track. Produced by Laundry Service Media and directed by Jason Stein, the video premiered on the Huffington Post and was featured on Perez Hilton.
Posted by Daniel at 10/26/2013 07:35:00 PM