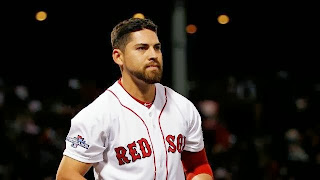 Jacoby McCabe Ellsbury (/dʒəˈkoʊbi/ jə-koh-bee; born September 11, 1983) is an American Major League Baseball center fielder with the Boston Red Sox.
He was first drafted by the Tampa Bay Devil Rays in the 23rd round of the 2002 MLB Draft, but did not sign. He was then drafted 23rd overall by Boston in 2005, after attending three years at Oregon State. Ellsbury is the only Red Sox player in history who is a member of the 30-30 club, which he accomplished on September 25, 2011, against the New York Yankees. In 2011, Ellsbury also won his first Rawlings Gold Glove Award, his first Silver Slugger Award, and was the American League MVP runner-up to the Detroit Tiger's Justin Verlander.
Jacoby is officially a member of the Colorado River Indian Tribes and is the first Native American of Navajo descent to reach the Major Leagues.  As of 2008, he was one of only three active non-Hispanic Native American players in Major League Baseball, along with Kyle Lohse of the Milwaukee Brewers and Joba Chamberlain of the New York Yankees. Ellsbury's mother Margie is full-blooded Native-American [Navajo]  and his father is of English and German descent.
Posted by Daniel at 10/26/2013 04:23:00 PM