Outstanding Writing for a Miniseries, Movie or a Dramatic Special 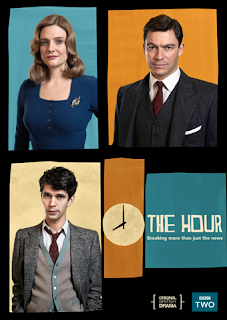 The Hour
Written
by
Abi Morgan
BBC America
The Hour is a 2011 BBC drama series centered on a new current-affairs show being launched by the BBC in June 1956, at the time of the Hungarian Revolution and Suez Crisis. It starred Ben Whishaw, Dominic West and Romola Garai, with a supporting cast including Tim Pigott-Smith, Juliet Stevenson, Burn Gorman, Anton Lesser, Anna Chancellor, Julian Rhind-Tutt and Oona Chaplin. It was written by Abi Morgan (also one of the executive producers, alongside Jane Featherstone and Derek Wax).
The series premiered on BBC Two and BBC HD from 19 July 2011 each Tuesday at 9 pm. Each episode lasts 60 minutes, with Ruth Kenley-Letts as producer and Coky Giedroyc as lead director. It was commissioned by Janice Hadlow, Controller, BBC Two, and Ben Stephenson, Controller, BBC Drama Commissioning and produced by Kudos Film and Television.
Following the airing of the final episode of the first series, it was announced that a second series had been commissioned, which is co-produced by American network BBC America. It was shown beginning on 14 November 2012 in the UK, and on 28 November 2012 in the United States.
It was announced on 12 February 2013 that the series was cancelled by the BBC.
Posted by Daniel at 9/22/2013 10:53:00 PM