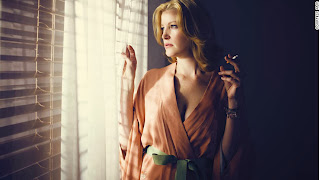 Anna Gunn
as
Skyler White
Breaking Bad
Episode
"Fifty-One"
AMC
Walt and Walter, Jr. pick up the Aztec from an auto repair shop, getting an impromptu history of all the repairs the beleaguered vehicle's been through this year. Still, the mechanic says the sturdy car has a lot of miles left in it. Walt retrieves his Heisenberg porkpie hat from the front seat, and — not thrilled at the prospect of driving this car until the day he dies — sells the car to the mechanic for $50.

Afterward, Walt pulls into the driveway in a brand-new Chrysler. Walter, Jr., watching from his PT Cruiser, gives the car mild approval. Walt gets the message: it's hard to love your dad's new ride when youíre cruising in a mom-mobile. A few hours later, Walt pulls into the driveway followed by Jr. in a new Dodge Challenger — the same model Skyler insisted go back to the dealership months ago. They both rev their engines, giddy with exhilaration.

At Madrigal in Houston, Lydia receives a call from Mike, who warns that the police are about to arrive. A few seconds later, Hank and Gomez enter with officers in tow. Lydia escorts them to the Madrigal warehouse and points out Ron, the foreman. Ron stares daggers at her as the officers arrest him: she's thrown one of her own to the wolves.