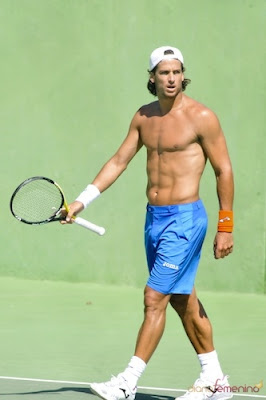 FELICIANO LOPEZ
Spanish
Feliciano López Diaz-Guerra (Spanish pronunciation: [feliˈθjano ˈlopeð ˈðiaðˈɣera]; born 20 September 1981) is a Spanish professional male tennis player. He was born in Toledo and now lives in the Spanish capital, Madrid. Lopez achieved his current career-high singles ranking of World No. 15 in January 2012.
In 2005, he was the first male Spanish tennis player to reach the quarter-finals of Wimbledon since 1972, when Manuel Orantes reached the semi-finals. This was Lopez's best Grand Slam result thus far and he repeated it at Wimbledon in 2008, losing to Marat Safin in four sets, and again in 2011, losing to Andy Murray in straight sets. Lopez defeated Tim Henman at the 2007 Wimbledon second round in what would be Henman's last Wimbledon match. He is sponsored by Wilson and Joma. In 2009, he played the then-longest match in Australian Open history, losing to Gilles Müller, before the Novak Djokovic–Rafael Nadal final and Rafael Nadal–Fernando Verdasco semifinal eclipsed it in time. Throughout his career, he has played in the most 5 set matches that have gone beyond 6–6, his longest fifth set being 16–14 at the 2009 Australian Open against Gilles Müller.
Posted by Daniel at 7/25/2013 03:57:00 PM