MTV’s 10 Most Underrated Series Ever 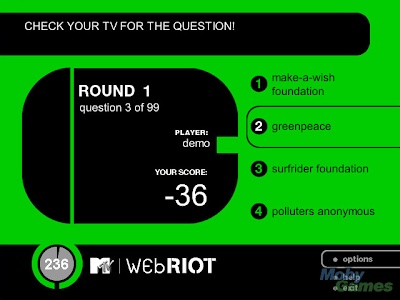 MTV has given us a number of underrated game shows, many in the vein of its seminal madcap quiz series Remote Control. One was an experimental internet venture called WebRIOT; hosted by Ahmet Zappa, contestants answered cheeky multiple-choice trivia questions while home viewers played via MTV’s website. It was a swift and pretty hip show — a music-centric version of the great computer game You Don’t Know Jack, complete with nutty asides from our shiny-headed host.
Posted by Daniel at 7/25/2013 10:16:00 PM