10 Straight-Directed Films that Got Us Wrong 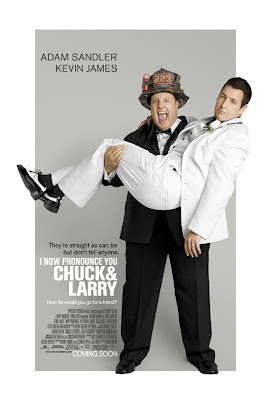 8.
I Now Pronounce You Chuck and Larry
2007
Dir. Dennis Dugan

Two straight men pose as a couple, ala Jack Tripper, of Threes Company, with a boyfriend. When GLAAD pre-screened this movie before its release, a representative told Entertainment Weekly, “The movie has some of the expected stereotypes, but in its own disarming way, it’s a call for equality and respect.” OK, not the worst refutation! But most found the Chuck-and-Larry screen time in poor taste, and the film received a Razzie for “Worst Screen Couple” for Adam Sandler—with either Kevin James or Jessica Biel as the other half.
Posted by Daniel at 6/25/2013 11:25:00 AM

Email ThisBlogThis!Share to TwitterShare to FacebookShare to Pinterest
Labels: 10 Straight-Directed Films that Got Us Wrong, movie