'The very first time when I stripped all the way down, I was surprised how nervous I was. Though I’d been used to being naked in the locker room at the gym, this for some reason was different. I was so nervous I had to sit down for a few minutes to pull myself together before we could start the shoot.'

With FH now in it's 10th year, there are certainly qualities and attributes in artists and models, that I have come to admire more and more. Comfortably with self has to be near the top of the list. There is a difference between confidence and comfortably, it is subtle, but distinct. There are many models who, especially when posing naked, look confident. They are proud of their bodies, and the work they have put into achieving their fitness goals. They don't necessarily however, always appear comfortable.

The first shots I saw of writer and model Nate Beck were those from his work with Lucido Photography. Nate looked so incredibly comfortable and relaxed that it only added to erotic intensity of the images. Now most people aren't naturally comfortable, especially when standing naked in front of a camera. It something many acquire with age, experience and in Nate's case, also with reflection and practice. Although he always wanted to model, Nate remembers seeing images hot male models but was not convinced that he had the right look. Nate wasn't deterred, and for fun would do self-portraits with auto timer, just to give it a try and see what it felt like.

'But... there was a photographer’s gallery around the corner from where I was living in San Francisco, with photos of all kinds of guys including guys who looked kind of like me. I got in touch with the photographer and asked if he would be interested, and he said to come in for an audition. So right before the audition I shaved off my body hair, thinking this was the look he’d want (this was the 1990's, and smooth was the predominant look at the time). He took one look at me and said, “Why did you do that? Come back when it’s grown back in.” At that point I knew there was a niche for a guy like me, and also I could stop shaving my chest! And it turns out that, yes, there are enough photographers out there who like my look that I’ve been able to build up a good portfolio.'

'I really like it when the photographer has a concept or “sees something” that I wouldn’t have thought of, and then when it’s all put together it’s a great surprise. I’ll typically bring a bag, or even a suitcase full of all kinds of clothes so we have a range to choose from. The photographer will then usually go through the clothes, and it’s interesting to see what they pick out and what they put aside. They’ll usually pick out stuff I wouldn’t have expected, and then often supplement it with stuff of their own. So the result is a fun kind of dress-up where together we put together something that resonates for both of us. Then when they send over the finished product it’s something new and different that I wouldn’t have imagined before. Even with the nude shoots, there are usually clothes to get started. In fact, I really love shoots where it strips down from dressed to nude. Recently I did a shoot where I started fully dressed in a suit and overcoat, and piece by piece stripped down to briefs and then nothing. I loved it!'

Speaking of posing nude, Nate says stripping down for the camera was something he always wanted to try. Nate describes his goal as not so much to have the final photos, but the thrill of the process itself. Nate was incredibly nervous the first time he shot naked, but today, those inhibitions are long gone. So much so in fact, a photographer recently laughed about his lack of inhibitions, commenting on how comfortable he seemed being naked. 'I don’t even think about it. In fact, I think the exhibitionist side of me really gets a kick out of it.'On his writings site, Nate wrote a bit about how his confidence with being naked in public grew through his visits to a nude beach. 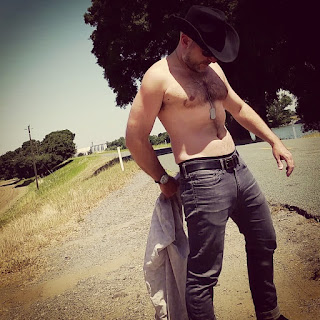 'Lying on my towel, I’d marvel at the guys who’d just stand up and walk down the beach naked. It took a long time for me to muster up the courage to go down to the water without my swimsuit on. Sometimes I’d see a group of guys walking along with some clothed and some naked, and think how weird…' 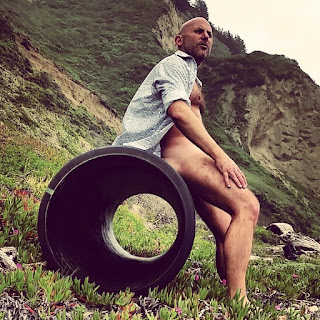 'Now having had years of stripping down at the beach, I’m much more comfortable with nudity. I think some of this comes with age too, as well as being confident with my sexuality. Of course it also helps that the beach is never crowded, so running around naked with relatively few people around doesn’t feel like such a big deal.' 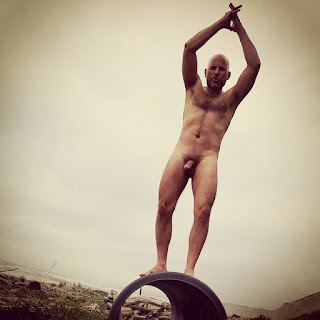 'It’s such a great feeling to be naked outdoors. But all of the shoots have been done under controlled conditions, whether it’s a nude beach where it’s OK to be naked, or a quiet place in the forest where there’s nobody around. There have been shoots where there may be people in the vicinity, then it’s a fast drop-of-the-pants and take a few quick shots. But then there was one shoot where the photographer had a private ranch with acres of woodland, and I hiked around naked the whole time. That was fantastic!'

'There are times when it can be a bit weird with other people around. Once I did a shoot in Balboa Park in San Diego, at a big amphitheater there with lots of people milling around. It was a wardrobe shoot and I had a few outfits like t-shirts and blazers, but then the photographer told me to take off my shirt. There are plenty of circumstances where not wearing a shirt is no big deal, but at that place with a fair number of people around all in regular clothes, it felt odd, and even odder to be there having photos taken. That’s probably my self-consciousness reasserting itself! But then I just thought, ‘who cares, I don’t know any of these people,’ and I just focused and blocked out the surroundings. And when the photos came back it was all worth it!'

'My chest seems to get the most attention, and I’m happy with how it looks and that it’s strong. I wasn’t athletic as a kid so as an adult it’s nice to have some upper-body strength and have something to show for it. More recently I’ve been happy to finally have an ass! Even as a young adult I didn’t have much of an ass, but with age and workouts I’ve finally got some results back there. That’s been a nice unexpected surprise!'

'As for why I model, maybe there’s a bit of narcissism, particularly since I was an awkward kid so it’s nice to see myself as something different. The first time I got some really good photos back from a photographer I thought, ‘Holy crap, is that me?’ It was really affirming, and allowed me to put some old ghosts to rest. But then trying to be more reflective about it, I think it’s a combination of expression and exhibitionism. I definitely have an exhibitionist tendency, so part of it is just liking to show off and have fun. But then when I see the final result of the photos or artwork, it also feels like creating art. As the model I’m part of the composition but there’s a whole lot more that goes into it, from the setting to the props to the lighting. In that sense it’s a real collaboration with the photographer, as part of their vision. So in particular I like working with all kinds of photographers and artists, since the process and results are so different each time.'