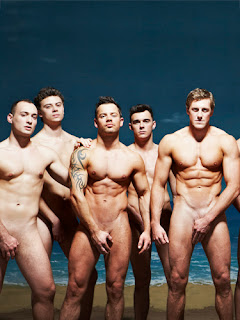 The Hunks
Ripped? Yes! Vain? Definitely! Our latest guilty-pleasure reality TV stars The Hunks couldn't wait to strip off for Cosmo - Marc Burgum even confessed to plucking his pubic hair for the occasion. TMI!

The Hunks was a reality television series which first aired on 19 April 2011 on Sky Living. The series follows 10 "Hunky" males spending the summer in Newquay, Cornwall and lasted for 6 Episodes until 24 May 2011.
The series was never released on DVD.