ALL HOT, ALL GOOD! 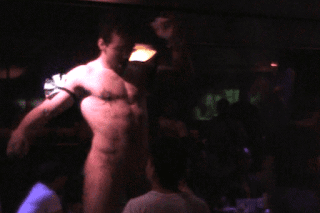 When I was invited to come to Atlanta to see a movie about male strippers, I took a nano second to say yes. I mean it’s not every day you have a legitimate reason to go see hot guys take off their clothes. So last weekend I was thrilled to be in the audience for the premiere of Gerald McCullouch’s documentary about the dancers and staff at Atlanta’s only all male and all nude strip club Swinging Richards.

Sponsored by Out On Film, Atlanta’s LGBT Film Festival, the showing was well attended and even one of the dancers featured in the film and his wife were there too. That’s right, he is straight but is happy to strip and entertain the clientele of Swinging Richards who are either gay men or straight women. 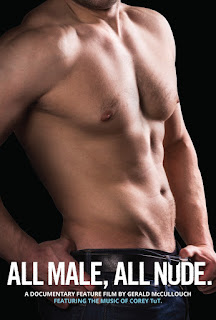 The film itself focuses on what the dancers think of their work and why they do it. McCullouch cleverly lets them just tell their story, and we the viewer just get to listen. At Swinging Richards on stage every night are approximately 75 different dancers, the film focuses on six of them, Steven, Sean, Pierce, Dallas, Matthew and Tory (stage names of course) and as well as capturing their thoughts outside in the parking lot and also in the dressing room, we do get to see these guys dancing, and it truly is all nude.

Each of the guys we meet has a different story, most of them are straight with girlfriends, and in one case a child to bring up and support. But they all come across as nice enough guys who are different to one another and very real people.

What Mccullouch has achieved is not to degrade the guys or even really promote stripping, he presents a peek behind the curtain of the dancers at work and also behind why they do what they do. The movie showcases men working hard to achieve either a life’s goal or to survive life and get by. Like the famous phrase “If you think sex workers ‘sell their bodies’, but coal miners do not, your view of labor is clouded by your moralistic view of sexuality”. The dancers are only doing a different kind of work with their bodies, they just get paid a hell of a lot more than coal miners ever did.

Right at the end comes a hell of a punch that hits you harder than you might expect, all becuase you actually get to like every single one of the guys presented. Go see it and change your mind about male strippers for ever.

All Male, All Nude will be available to stream later this month for $9.99 only atwww.allmaleallnude.com, sign up on the site for a notification of when it’s live. Release Date is April 15th 2017

The soundtrack is by Corey Tut, check out his Bandcamp site: coreytut.bandcamp.com