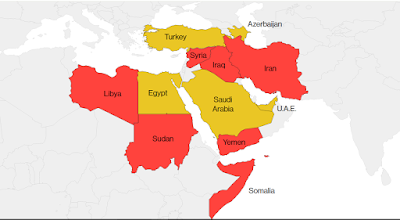 Saudi Arabia — you know, the country that brought us the 9/11 hijackers? — is not on Trump's Muslim-ban list. (Which is a black spot on America and always will be.) The graphic to the left gives you a hint why: $$$.

This always has been, and always will be about MONEY. #MuslimBan #The Resistance https://t.co/aJjfglijTi
— Girls Really Rule. (@girlsreallyrule) January 28, 2017 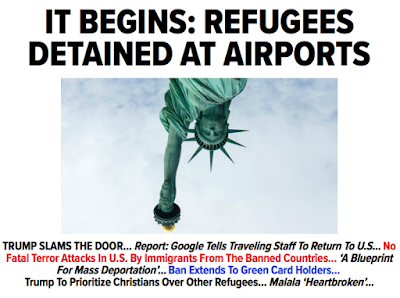 In the meantime, people who pose no threat to the U.S. are banned from entering — including travelers holding legit green cards.

The U.N. (and anyone with any common decency) is calling on Trump to end the ban, which he instituted within his first week in office — a week the very conservative Washington Post calls “erratic” and ranks among “the most alarming in history.”

When WaPo is using language like that, it's time to take off the kid gloves and stop kidding yourself that we need to unify and support Trump, who is not only ideologically cretinous, but also terribly unpredictable, self-motivated (he'll make bank off at least one of the pipelines he green lit via fiat) and just plain nuts.