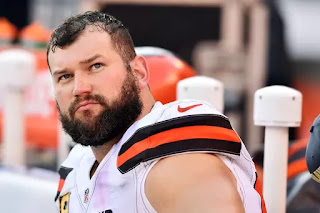 At the Pro Bowl,  NFL players are being asked their views on have gay teammates,  Cleveland Browns offensive tackle Joe Thomas blurted out: “Brad Thorson.”

Thorson was a teammate of Thomas at the University of Wisconsin and came out publicly as gay in 2014. Thorson had a brief stint with the Arizona Cardinals but never played in an NFL game. It was clear that Thomas considered Thorson a great teammate since that was the first thing he said to me.

“In college [at the University of Wisconsin], Brad Thorson was one of my good friends and teammates, a friend of mine. He was not out when we were playing together and he came out a couple of years ago,” Thomas said after an AFC Pro Bowl practice.

Thomas has made the Pro Bowl all 10 of his seasons in Cleveland and is perhaps the best left tackle in that period. He was unequivocal about how an openly gay NFL player would be accepted now.

“It's amazing the opinions in the locker room have changed 180 degrees from when I first started playing football to where they are right now,” Thomas said.

“I think every locker room in the NFL would accept an openly gay teammate with open arms, where it was such a taboo thing to even talk about when I first got into the league. That speaks to the tremendous progress that LGBT issues have had in our country in such a short period of time.”

It’s clear from two days of talking to players here that his view is not alone. Aftert several players, being asked,  from all over the league, there has yet to hear a negative comment from anybody.
Posted by Daniel at 1/29/2017 07:44:00 PM