Leaves a bad taste in your mouth, no?
From: NewNowNext

The Trump administration has already been accused of plagiarizing: Trump’s inaugural address seemed to lift passages from The Dark Knight Rises and Avatar, while his Twitter background picture was actually from President Obama’s 2008 inauguration. 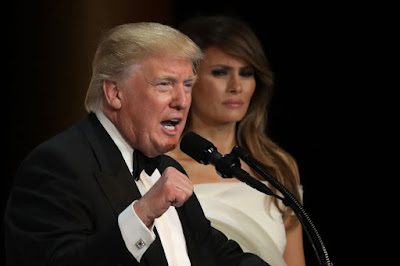 But now it looks like the Trumps even cribbed President Obama’s inauguration cake.

Pastry chef Duff Goldman of Ace of Cakes fame tweeted a photo of the towering confection he created for Barack Obama’s second inauguration in 2013, next to the one served last night at Trump’s “Salute Our Armed Services” ball.

The cake on the left is the one I made for President Obama's inauguration 4 years ago. The one on the right is Trumps. I didn't make it. 🤔 pic.twitter.com/qJXpCfPhii
— Duff Goldman (@Duff_Goldman) January 21, 2017

The two are nearly identical.

“I didn’t make it,” Goldman posted about Trump’s cake. 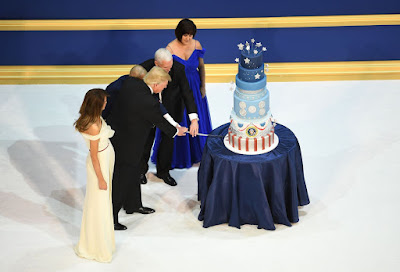 This morning, Tiffany MacIsaac, owner of Washington’s Buttercream Bakeshop, confirmed she made the new cake and explained the client came in with a photo of Obama’s cake and asked them to recreate it exactly.

“They came to us a couple of weeks ago, which is pretty last minute, and said ‘We have a photo that we would like to replicate,’” MacIsaac told The Washington Post. 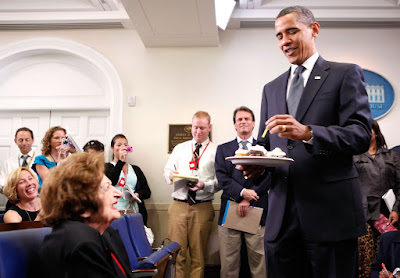 MacIsaac said her team tried to steer the client toward using Goldman’s cake as more of an “inspiration” than a carbon copy. “They said, ‘Nope, they want this exact cake. It’s perfect.’ And we said, ’great.’”

She revealed that proceeds from the Trump inaugural cake are being donated to HRC, the country’s leading LGBT advocacy group. 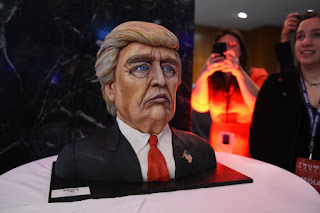 “I’m a small-business owner and one of the things I’m very, very proud about is that I don’t discriminate,” MacIsaac said. “I would never turn someone away based on their age, their sex, their sexual orientation, their political views. It’s just not the way we operate.”

The icing on the cake in this pastry story: The Trump cake was never really intended to be eaten—everything but a three-inch slice at the bottom is inedible.
Posted by Daniel at 1/21/2017 10:28:00 PM