LGBT-related info from the Department of Labor has also been removed
From: NewNowNext

It might be some time before we see the effects of Donald Trump’s presidency on civil liberties, but there are already signs they won’t be positive: The White House’s LGBT page, WhiteHouse.gov/LGBT, has been taken down.

The URL now redirects to a splash page inviting visitors to sign up for updates from President Trump.

Also removed from the “issues” section of WhiteHouse.gov are pages focusing on climate change, health care and civil rights.

The page on climate change was replaced with a page entitled “An America First Energy Plan” that ignores climate change entirely and declares President Trump “is committed to eliminating harmful and unnecessary policies such as the Climate Action Plan.”

The civil rights section now carries information on “Standing Up For Our Law Enforcement Community,” calling for increased police.(The words “black” and “African-American” no longer appear on any policy page on WhiteHouse.gov.) As Daily Beast reports, “[It] paints predominantly black inner cities as shooting galleries.”

“In our nation’s capital, killings have risen by 50 percent,” despite the fact that homicides in Washington, D.C. were down last year.

It’s only been 25 min and the Dept. of Labor’s report on Advancing LGBT Workplace Rights has been taken down. https://t.co/KzBp8VZweD pic.twitter.com/UhnWqWZvPC
— Jay Franzone (@JayFranzone) January 20, 2017

Some information is still on government sites, thankfully, including details for LGBT travelers on the State Department website, and a resources page for trans and gender-nonconforming students on the Department of Ed site. 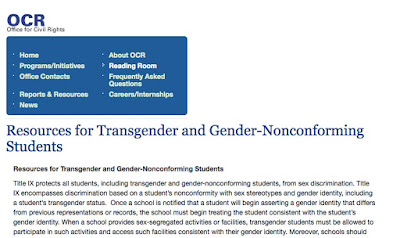