The president-elect has made changing his mind a way of life. Why would his young presidency be any different?
From: Politco 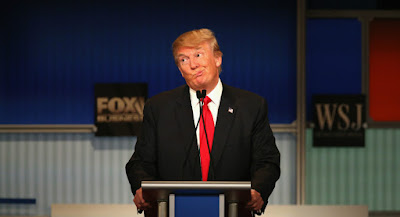 In May, Politico compiled the most comprehensive list ever of the then likely GOP presidential nominee’s history of self-contradictions, flip-flops and even flip-flop-flips. Over the course of four decades of radio and TV interviews, newspaper and magazine profiles, books written about him and books written by him, rambling campaign speeches and late-night tweets, Donald Trump has created a vast archive of arguments with himself.

Well, the candidate who told his supporters he likes to “tell it like it is” is now the president-elect—and he still hasn’t found a comfortable resting place on many of the issues that defined his history-making candidacy. Since his surprising election, Trump has switched his stands on everything from his signature border wall to his rather low opinion of the man he is replacing in the Oval Office. He has a way to go to before he matches the sheer volume of self-disagreement that he racked up prior to Election Day, but his batting average over his brief time as the 45th president is perfection itself—15 about-faces in 15 days.

“I have great respect…I very much look forward to dealing with the President in the future, including counsel. He explained some of the difficulties, some of the high-flying assets and some of the really great things that have been achieved.”
(White House, November 10, 2016)

“Love the fact that the small groups of protesters last night have passion for our great country. We will all come together and be proud!”
(Twitter, November 11, 2016, 6:14am ET)

“I like those [the prohibition against insurers denying coverage because of patients’ existing conditions and a provision that allows parents to provide years of additional coverage for children on their insurance policies] very much.”
(Wall Street Journal, November 11, 2016)

On the border wall

“If I’m elected, I would be very strong on putting certain judges on the bench that I think maybe could change things…I don’t like the way they ruled…I would strongly consider [trying to appoint justices to overrule the decision on same-sex marriage].”
(Fox News Sunday, January 31, 2016)

On locking her up

“If I win, I am going to instruct my attorney general to get a special prosecutor to look into your situation. There has never been so many lies, so much exception. There has never been anything like it. We will have a special prosecutor. I go out and speak and the people of this country are furious. The long time workers at the FBI are furious. There has never been anything like this with emails. You get a subpoena and after getting the subpoena you delete 33,000 emails and acid wash them or bleach them. An expensive process. We will get a special prosecutor and look into it. You know what, people have been—their lives have been destroyed for doing one-fifth of what you have done. You should be ashamed.”
(Second Presidential Debate, October 9, 2016)

“I don’t want to hurt the Clintons, I really don’t…It’s just not something that I feel very strongly about.”
(New York Times, November 22, 2016)

“We have at least 11 million people in this country that came in illegally. They will go out.”
(CNN-Republican Debate, February 25, 2016)

“What we are going to do is get the people that are criminal and have criminal records, gang members, drug dealers, we have a lot of these people, probably two million, it could be even three million, we are getting them out of our country or we are going to incarcerate.”
(60 Minutes, November 13, 2016)

“Well the generals under Barack Obama and Hillary Clinton have not been very successful.”
(Commander-in-Chief Forum, September 7, 2016)

“The @nytimes states today that DJT believes "more countries should acquire nuclear weapons." How dishonest are they. I never said this!”
(Twitter, November 13, 2016)

On the Electoral College

“The electoral college is a disaster for democracy.”
(Twitter, November 06, 2012)

“The Electoral College is actually genius in that it brings all states, including the smaller ones, into play. Campaigning is much different!”
(Twitter, November 15, 2016)

On the Trump University lawsuit

“I settled the Trump University lawsuit for a small fraction of the potential award because as President I have to focus on our country”
(Twitter, November 19, 2016)

On the Paris climate agreement

“Torture works. OK, folks? You know, I have these guys—‘Torture doesn’t work!’—believe me, it works. And waterboarding is your minor form. Some people say it’s not actually torture. Let’s assume it is. But they asked me the question: What do you think of waterboarding? Absolutely fine. But we should go much stronger than waterboarding.”
(South Carolina, February 17, 2016)

“[Mattis] said, ‘I’ve never found it to be useful…Give me a pack of cigarettes and a couple of beers and I’ll do better.’…I was very impressed by that answer… [Torture is] not going to make the kind of a difference that a lot of people are thinking.’’
(New York Times, November 22, 2016)

On the New York Times

"Wow, the @nytimes is losing thousands of subscribers because of their very poor and highly inaccurate coverage of the 'Trump phenomena.'"
(Twitter, November 13, 2016)