What Happened With The Explosion In New York City?

The blast happened near the heart of Chelsea's gay neighborhood.
From: NewNowNext

Manhattan’s Chelsea neighborhood was rocked by an explosion last night around 8:30 pm, resulting in shattered windows, street closings and at least 29 people being injured.

Mayor Bill de Blasio called the incident “an intentional act,” though it is unclear who the perpetrators were or why they set the explosion. 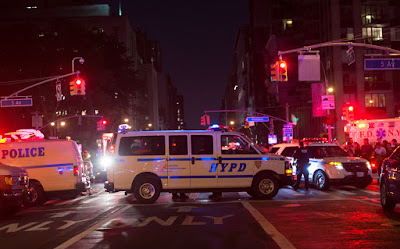 Police say the blast originated from a homemade bomb in a Dumpster in front of 131 West 23rd Street, an avenue away from a strip of Eighth Avenue popular with New York’s gay community.

A second unexploded device was found on West 27th Street, a “pressure-cooker” device similar to the one used in the Boston Marathon bombings in 2013.

Mayor de Blasio says there was “no specific and credible threat against New York City” at the time, and there are no suspects currently.

A separate explosion occurred Saturday morning in Seaside, New Jersey, when an improvised device went off in a garbage can near a charity race. It is not believed the two incidents are connected.
Posted by Daniel at 9/18/2016 04:49:00 PM